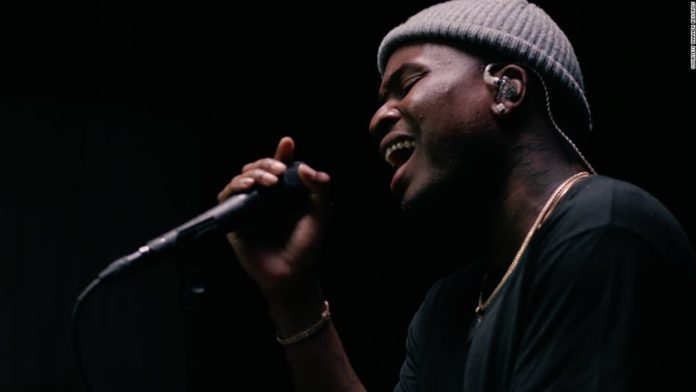 The Maryland rapper bucked convention, opting instead to use his moment on Monday’s edition of “The Late Show with Stephen Colbert” to deliver a message.
“A lot of people don’t understand what it’s like to be black in America,” he told CNN. “I refused to do late night if they wanted me to do whatever song was streaming the most.”
The home audience doubtless would’ve danced along to “24,” off his debut album, or the more recent “Mazel Tov” with A$AP Ferg. The videos have each drawn about 1.5 million views on YouTube.
IDK knows “Colbert” presented a moment.
The late night talk show has hosted performances by only a handful of some of hip hop’s biggest names, including Kendrick Lamar, Chance the Rapper, and Tyler, the Creator.
IDK was already primed to blow up. Recent headlines have touted Kanye West’s and NBA star Kevin Durant’s interest in his music. The latter had IDK do the narration and soundtrack for his Showtime documentary, “Basketball County: In the Water.”
While performing a high-energy track would have been “cool and all,” the 28-year-old said, “Nobody really learns anything except this is a new artist and they’re good.”
That wouldn’t do, not with everything going on in the nation.
He instead chose “No Cable,” an introspective and thoughtful critique of life in America that forgoes a traditional hook for “Change the channel,” a reference to the tendency to turn away from issues such as police brutality, school violence and homophobia.
At times, it feels more spoken word than something hip-hop fans would nod heads to. IDK added some soulful harmonizing and the song is not without groove, but the lyrics are heavy, designed to make listeners think more than dance.

‘I wanted people to listen’

The rhymesmith’s passion is evident as he delivers the track’s most poignant bars to “The Late Show” audience:
“Why every time I see a white person I question myself, like, “Am I gonna scare them cuz I’m black?”/
But when I put my white voice on and ask him for directions, he just gives them to me with a dap/And a smile”
Before he hits them with one of the most chilling lines: “Cuz if I make the wrong turn and stop at a gas station, listen, there’s a small chance that I could probably be lynched.”
Late-night shows invited IDK to their daises when his studio debut, “Is He Real?,” dropped in September, he said. They wanted him to perform “24,” but IDK stood strong by his principles: It was “No Cable” or nothing.
He was willing to cede his moment to put the spotlight on Black lives, he said.
Months later, as the country grapples with its reckoning over race and its history of inequality, Colbert’s team invited IDK onto the show — to let him do the song he wanted, or perhaps needed, to do.
“I always look at people like J. Cole and Kendrick (Lamar), even Chance the Rapper, who’ve used that platform to have a song that really speaks to people,” he said. “I wanted people to listen.”
As the live accompaniment played toward crescendo, the names of more than 50 victims of violence — including Eric Garner, George Floyd, Renisha McBride, Ahmaud Arbery and Sandra Bland — appeared on a screen behind the rapper.

IDK, an acronym meaning Ignorantly Delivering Knowledge, wrote the song two years ago while on tour in Europe. The beat got him thinking about how “if it’s not happening to you, just change the channel,” he said.
“The beat called me to say something about the world we live in and everything going on,” he said.
It’s not enough to be anti-racist, he said. It’s more important to be pro-Black. People need a different lens. Knowledge is more accessible than ever, he said, and people should use it to educate, or even reprogram, themselves. Not all bigots are beyond redemption, he said.
IDK pointed to his own realization that the homophobic attitudes so prevalent when he was growing up in Prince George’s County were wrong, he said.
“So many things in my life, I had to unlearn. … Being around gay people, lesbians, learning they’re people just like us and they deserve to live how they want to live,” he said. “If you see something wrong happening to those people, you kind of have to step in.”
It took decades, he said, for America to realize what its Black citizens were experiencing — that African Americans weren’t exaggerating about police brutality and other inequities — and he feels eyes are opening.
It nonetheless concerns him “there are people who still believe we have equal opportunity,” he said.
IDK wants it clear: He’s no activist, he’s no saint and he’s not perfect, but “all of what I’m putting out in this world comes from my imperfections.”
He’d like more people in power to elevate Black artists’ voices, focusing on what they’re saying rather than demanding their hottest jam.
“Nobody wanted to give me that chance, but now this topic makes sense. I was trying to warn you what was going on in the world today,” he said. “I want these companies to stop looking at streams, if somebody has something powerful to say.”