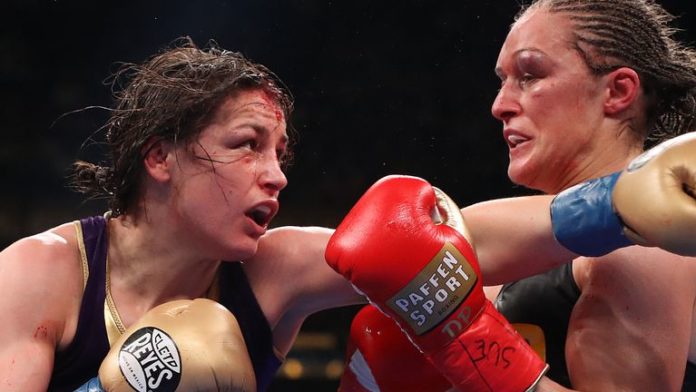 “She’s been talking about stopping the fight early so we’ll see. That’s all I can say”

Natasha Jonas insists she can exploit Terri Harper’s disadvantage in experience in their world championship fight.

Harper will defend her WBC super-featherweight belt against Jonas on August 7, live on Sky Sports, in the fight-ever world title fight between two British women.

2012 Olympian Jonas, who is 13 years older than the champion, said about Harper: “She’s young, she’s hungry and she’s proved she can do 10 rounds

“She’s fit, but I also think that some of those things can be your undoing when you’re young.

“Sometimes you’re a bit naive, you can be a bit overeager when you’re hungry.

“She’s been talking about stopping the fight early so we’ll see. That’s all I can say.

“She’s done everything asked of her. She’s beaten people I couldn’t. She’s beaten experienced girls like Eva Wahlstrom. She’s took the title, she’s got the title, and I’ve just got to take that off her.

“Hats off to her for everything she’s done. I’ve got nothing bad to say about her.

“I’m realistic. I’ve just got to bring the best version of me, and I don’t think she can deal with that.

“I think she’s the bookies’ favourite. Judging by some social media comments I’ve seen she’s possibly edging it with the fans too.

“Every time I’ve come back into boxing there’s always been a reason, like unfinished business.

“To win and to hold the belt would finally sort that unfinished business. That will make me complete. I’ll be prepared, whether it’s one round or 10 rounds. I’ll be prepared and I’ll keep going. There’s nothing she does better than me, and I’ll prove it on August 7.”

Harper and Jonas meet on the second week of Fight Camp alongside Chris Billam-Smith vs Nathan Thorley, Anthony Fowler vs Adam Harper, Aqib Fiaz vs Kane Baker and an outing for Hopey Price.