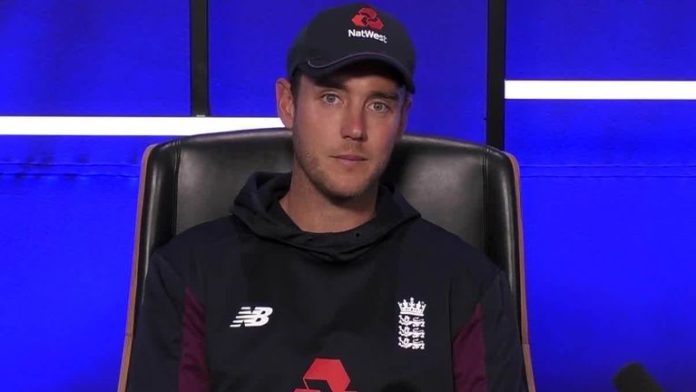 “If we had got around 50 or 60 more runs, batted for an hour longer, it could have completely changed the dynamic of the chase. West Indies would have been under some time pressure”

Ollie Pope blogs on Stuart Broad’s unwavering desire to play for England and if an absence of fans affected the team in the first Test against West Indies, plus shares his memories of watching last summer’s World Cup final epic…

Being around guys like Stuart Broad and James Anderson, who have played well over 100 Test matches, and seeing the hunger they still have is pretty inspiring.

You could see how much it hurt Broady for him to be left out of the first Test against West Indies and how much he still wants to play Test cricket for England.

The fact we are very close as a team enables us to say exactly how we are feeling and Broady spoke very openly and honestly to Sky Sports about how disappointed he was to miss out.

But there was no finger-pointing in anyone’s direction, no blame dished out. He is going to use not being selected as a driver for the next Test.

He has been training hard and doing everything he can to try and break back into the side at Emirates Old Trafford.

I know Broady has praised the way Ben Stokes dealt with the situation and I think Stokesy did a very good job as captain all week. We all enjoyed working under him.

He does not need the role of captain to be a leader as he is always someone we look up to but I think he loved the opportunity to be in charge. He was very calm on the pitch, very approachable.

Everyone was a bit frustrated, a bit flat, at the way the Test finished but we were all happy with the efforts we put in. We mentioned about leaving nothing out there and that’s exactly what we did.

We were in with a good chance of taking those wickets and we all believed we could get all 10. We get those three early ones but when the ball got softer, we struggled to find those breakthroughs and Jermaine Blackwood played really nicely for West Indies.

We knew how the wicket was going to play – when the ball was harder it started going up and down and moved a little bit off the seam but as it was a slightly slower wicket, when it got softer the nicks were not really carrying and the ball did not do as much off the pitch.

We had other opportunities on day five, of course, but, really, we could have done with more runs in the first innings – the conditions were tough but we knew they were going to be – and then driven home that advantage in the second innings as well. Those were the key stages in the game.

If we had got around 50 or 60 more runs across day four and the morning on day five, batted for an hour longer, it could have completely changed the dynamic of the chase, as West Indies would have been under some time pressure in order to get over the line.

I remember chatting with a few of the lads after Cape Town this winter when we beat South Africa on the final day and there was nothing like it – the atmosphere our fans generated was great. We had 20,000 people behind us in an away game and it was the best atmosphere I have ever played in.

It would have been amazing to have the Barmy Army singing in Southampton on Sunday, but I don’t think them not being there affected us at all, as we were so caught up in the job at hand. We made a big point of ‘doing it for the badge’ – we knew how important it was for people watching at home.

It was our first competitive match in five months and we have a few learning points to take. We can certainly look back on those key moments and what we would have done slightly differently.

I wouldn’t say we were rusty as team, I think all the individual skills were there. It was probably more from a mental point of view of getting back into playing a five-day Test match. I think we have got over that now as we prepare for the next Test.

I think that is the eighth time in the last 10 series we have lost the first Test but we have shown in the past we can come back from that. We did it in South Africa recently and that is something we spoke about in the changing room afterwards. We have got that bouncebackability and are ready to go again as we really want to win this series.

Jason Holder and Shannon Gabriel took a combined 16 wickets in the match at The Ageas Bowl and are obviously both very good, but very different, bowlers.

I have never faced anyone as tall as Holder before and the extra bounce he gets just draws you into playing a little bit more. He is not the quickest but he has a great seam position, skills and consistency and his extra height provides an extra challenge.

Shannon then provides that extra pace and he was able to find a bit more out of that slowish wicket.

It was good to face them and now that I have had a little look at them and understand their angles a bit more and what they are trying to do with the ball, it will hopefully make things slightly easier second time around.

There is plenty of long hair around the squad at the moment and I don’t plan on keeping mine in the long run. It’s getting to the point where it will be a tough challenge for anyone to cut.

I am not sure if we will be able to go to the hairdressers between the West Indies and Pakistan series but whenever we are first allowed I will be visiting pretty quickly. I don’t think I pull long hair off as well as Ben Foakes!

It is a year since England won the World Cup – a game I watched unfold on my iPad with my TV not up and running at that point after I had just moved into a new flat.

The final was an amazing day and I couldn’t believe what I was watching at the time. I saw the boys the day after and they were obviously a bit tired after the previous night’s celebrations!

There is a road near where I live with a lot of cafes and there was a big street party on it on the day of the final, with big screens up of the game and loads of kids playing cricket on the street.

People were perched up with a beer watching and it felt like cricket was the No 1 sport in the country. I saw images of Hyde Park, too, and it looked like the Football World Cup was on.

Stokesy’s innings was remarkable but I think Jos Buttler’s knock was vital and goes under the radar a little bit with the focus on Stokesy and then Jofra Archer in the Super Over. Jos came in and played really fluently and without him helping Stokesy, they probably wouldn’t have got over the line.

For the guys to keep their cool, knowing it’s a World Cup final and means everything, knowing everything they had worked for was coming down to this, was ridiculous.

One year on: How England won World Cup

I have quizzed Jason Roy about the last-ball run-out of Martin Guptill – it is always nervous fielding in that situation in a regular T20 game but in a World Cup final, the pressure was staggering, especially as he had had a little hiccup earlier in the Super Over.

The way he held his nerve says a lot about him as bloke and, knowing him as I do, I reckon he would have wanted to be in that situation.

Jofra, meanwhile, had not even played a Test match at the time he was given the responsibility of bowling the Super Over – he was still so new, so to stand up and execute some really good yorkers shows his skill and character. He was the perfect bloke for that situation.

That final and then the Ashes later on certainly made me want to be part of things even more.

Seeing the impact those events had on the country and sport as a whole and knowing, as I came back from my shoulder injury, that I was potentially only three or four good innings way from breaking back into the squad, really did drive me on.

Watch Ollie in action during England’s second #raisethebat Test against West Indies at Emirates Old Trafford. Our coverage of day one begins at 10.30am on Thursday on Sky Sports Cricket and Main Event.