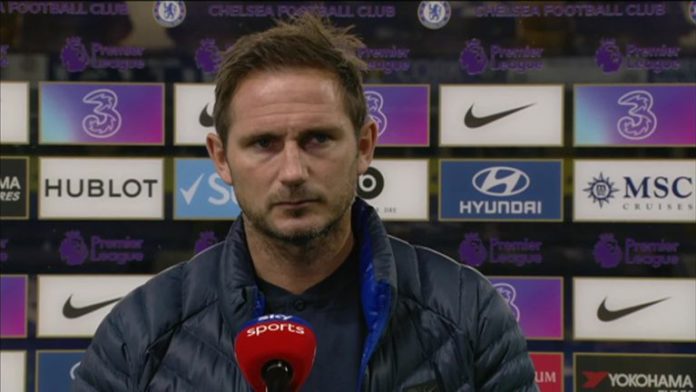 ​​​​​​​Chelsea head coach Frank Lampard admitted to there being a “nervy feeling” after watching his side squeeze out Norwich to strengthen their grip on third place in the Premier League.

His side need four points from their remaining two Premier League games – away to Liverpool, and at home to Wolves on the final day – to be guaranteed of a Champions League place next season.

They did enough to defeat an already relegated Norwich team on Tuesday thanks to Olivier Giroud’s sixth league goal in his last eight starts on the stroke of half-time at Stamford Bridge.

Asked to assess the race to secure a Champions League spot, Lampard told Sky Sports: “It’s a tough one to call. We know our fixtures are hard, but everyone else also has tough games. This is the Premier League and it’s not easy.

“We take our three points, we focus on ourselves, we can sit down and watch the other teams this week and focus on our FA Cup semi-final at the weekend [against Manchester United], but there’s obviously still work to do.

“There’s a nervy feeling for understandable reasons, so I’m pleased. We went a bit slow for about 10 or 15 minutes in the second half. Then we began moving the ball again and there was a bit of personality in our game today, but we can improve.”

This was an underwhelming display from Chelsea, who overcame a slow start to lead at the break after Giroud scored with virtually the last touch of the first half.

But Lampard was pleased with how his defence, boasting two changes from the 3-0 loss at Sheffield United, stopped their opponents from mustering a single first-half shot for the fourth time in the Premier League this season, more than any other side.

Lampard added: “As we’ve seen in the last 48 hours at this stage of the season, results are critical.

“We didn’t concede any chances of big note for them to score a goal and we created quite a few ourselves. Maybe we could’ve been a bit better with our quality, but it was professional.

“I want more, but that can wait. Where we’re at as a team, and the position we’re in the table, three points is everything tonight. I live the game, so I wanted a bit more quality during the first half. I believe the group has more quality than it showed in those early stages and we needed to move the ball quicker.

“We have to be more mobile which we did here in our last game against Watford, but if we really want to move on longer-term it has to be better, but I don’t want to be too critical as three points at this stage isn’t easy.”

‘Giroud is due a lot of credit’

Since his Premier League debut in August 2012, Chelsea striker Giroud has scored 31 headed goals in the competition, five more than any other player in that time.

This was a trademark finish from the Frenchman to settle the contest as he outmuscled Timm Klose to steer his header beyond Tim Krul.

Lampard said of the match-winner: “He’s always going to give you that desire for the team, and I know he had a fair few half chances but we have to use his attributes by getting the service in for him. It was a brilliant cross from Christian for his goal and he’s a big character for us, and he’s scoring important goals for us at the moment.

“Just before lockdown, he came in and was part of a couple of big results, and he’s due a lot of credit. He’s never given me a problem, he’s always trained brilliantly. When Tammy [Abraham] was playing well at the start of the season and staying regularly in the team, his professionalism was always good.

“In January, I told him I wanted him to stay and he was fantastic in how he handled that. The way he plays is important for us.”

It was an eighth successive league defeat for Norwich, who were already condemned to relegation after losing to West Ham United on Saturday.

The Canaries have now lost 25 Premier League games this season – the most defeats they have ever suffered in a league campaign – but Daniel Farke was proud of his team’s performance.

The Norwich boss told Sky Sports: “Two days ago we were relegated, so it’s not now happy days for us, but I am pretty pleased with the reaction of my lads today because we had to deal with the disappointment against a Chelsea side who needed to win this game, were highly motivated, and we were very disciplined, compact and not far away from winning a point.

“In terms of the commitment, desire, defensive workload, it was a really good performance. Of course we are sad because we are not able to go away with at least one point, but I am happy with the reaction after relegation, and for that I just have compliments for my lads.

“It’s the consistency you are always struggling with when your individual quality is not at the top level. On a good day, we are competitive, but we are even competitive against the best sides in this league, winning games against Leicester and Manchester City.

“But when we are not spot on across all topics, we are trash. A better side with more individual quality, they can at least be solid and fight for a point, but we are not capable of doing that. We have to always be spot on with a 100-per-cent performance, and we did that today and were competitive.”