Home Sport Mayer emerges as a threat to Harper’s title 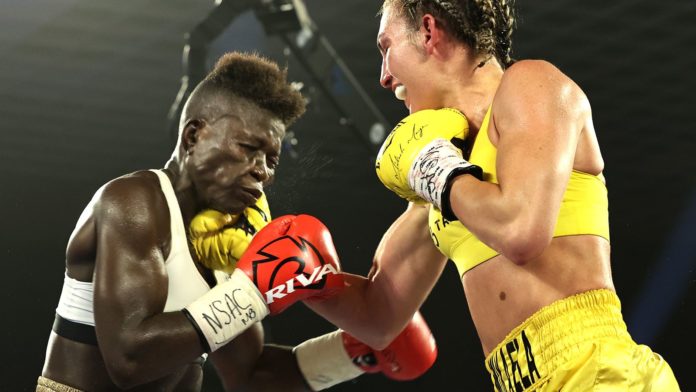 “The next one will be for the title,” Mayer said. “We’ve been trying to get a world title fight for a while now”

Mikaela Mayer beat Helen Joseph by unanimous decision on Tuesday night in Las Vegas to announce herself as a major contender in the division where Terri Harper owns a world title.

Undefeated Harper puts her WBC super-featherweight belt on the line against Natasha Jonas on August 7, live on Sky Sports in the first world title fight between two British women.

But she must now keep an eye on Mayer, an American 2016 Olympian who brought up her 13th consecutive pro win then called for a world title shot.

“The next one will be for the title,” Mayer said. “We’ve been trying to get a world title fight for a while now.”

This fight had been postponed when Mayer tested positive for coronavirus and, for the rescheduled bout on Tuesday, she fought without her trainer who had also tested positive.

Mayer outclassed Joseph over 10 rounds to deliver a reminder of her potential.

Harper must first defend her belt for the first time against fellow Brit, and 2012 Olympian, Jonas.

Jonas said: “She’s young, she’s hungry and she’s proved she can do 10 rounds.

“She’s fit, but I also think that some of those things can be your undoing when you’re young.

“Sometimes you’re a bit naive, you can be a bit overeager when you’re hungry.”