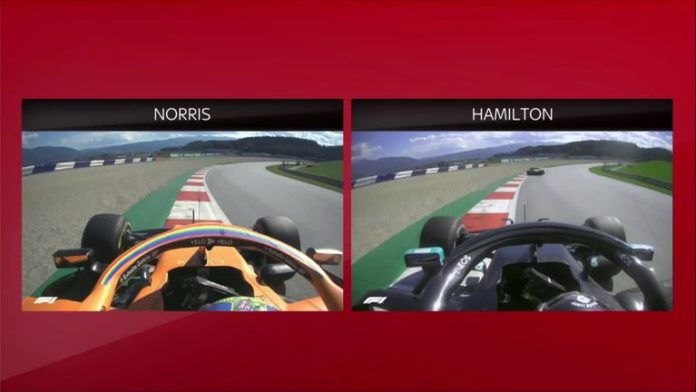 Sky F1 expert Mark Hughes analyses Norris’ superb start to F1 2020, which has shown he’s “very comfortable at McLaren and within the sport’s top category”; Plus, how Sainz dynamic has helped young Brit

Team unity at McLaren played its part in the flying start to the season enjoyed by Lando Norris. But so also did the sophomore driver’s superb personal performances.

Norrs is flying high after the opening two races of the season around the Red Bull Ring. Over those two weekends he delivered performances littered with sparkling moments of brilliance to get his second season of F1 underway.

There was his superb fourth-fastest qualifying lap for the Austrian Grand Prix and his stunning late chase-down of the 5s penalty gap to Lewis Hamilton the next day to secure his first podium. This was followed up a week later with a similar late charge that took him past three cars in the last two laps to win the ‘Class B’ battle virtually on the line once again.

It’s clear he’s very comfortable in his environment at both McLaren and within the sport’s top category.

There were times last year when, for all his great potential, he did look like a rookie. Just small things, letting the set up get away from him at a time of changing track temperatures, or leaving the door open on-track in a moment of inattentiveness, with so many demands flooding his brain.

But in these two opening races he looked very much the finished product.

It was as if during the off-season his mind had managed to put all the component pieces together in exactly the required way to deliver – brilliantly – every time he sat in the car.

The one exception was the three-place grid penalty he picked up for passing under yellows during Friday practice, when he was perhaps distracted by chest pains, about which he said, “It’s not so much my back but something inside. When I hit the brakes and cornering I am getting some compression from the G force and it is causing a lot of pain.” The problem was ‘identified and understood’ by Sunday and with the help of painkillers he was much more comfortable.

His arrival at McLaren, first as an occasional Friday driver late 2018, has coincided with the young team’s upward competitive trajectory. He’s part of that journey they are all on and it’s a happy ship.

It’s a very different dynamic to when the great champion Fernando Alonso’s late career days were being frustrated by the competitive limitations of the car/engine 2015-18. It was no-one’s fault, but the trajectories of driver and team were not well-matched and it inevitably created a tension.

That’s not the case with the Norris/Carlos Sainz partnership – and even though that pairing is going to be broken up next year, with Sainz’s recruitment by Ferrari and his replacement by Daniel Ricciardo, it’s still functioning extremely well.

This harmonious relationship was actually a crucial part of Norris’ result in the second of the Austrian races. In the first race Norris and Sainz were battling hard on-track, with both Sergio Perez and with each other, in the late stages. They even rubbed tyres on one occasion. That battle delayed Norris getting to within the required 5s penalty gap of Hamilton and might have cost him the podium. It didn’t, but only thanks to a quite stunning final lap, which also garnered him the extra point for fastest lap.

In the Styrian Grand Prix Sainz – with his own Class B-dominating race ruined by a long pit stop delay – played the team game to allow Norris on his much newer tyres to pass and attack those ahead. Without that, Norris would not have been in place to have taken advantage of the Lance Stroll/Ricciardo Turn 3 incident to pass both them and the crippled car of Perez two corners from home.

Norris and Sainz have an infamously great buddy, jokey sort of relationship but remain deeply competitive with each other. It’s to the credit of them both that this hasn’t spilt over into any acrimony.

But Norris accepts it may not always be so and pre-season said, “We’re going to probably fall out a few times in terms of getting frustrated with one another, [if] he holds me up… or I hold him up or something. Not on purpose, because I don’t think it will ever go that far. But you lose out on a position or something because you’re racing, or you’re side by side and you squeeze him and he has to run off or I have to run off the track. You’re going to have something like that, and someone’s going to be annoyed about it and one of us is going to be unhappy. Yes, I think that is going to happen.”

In the first two races they have each qualified once on the second row and each set a fastest race lap. This looks set to be an epic intra-team contest and Norris is much better-equipped to fight it in his sophomore season.