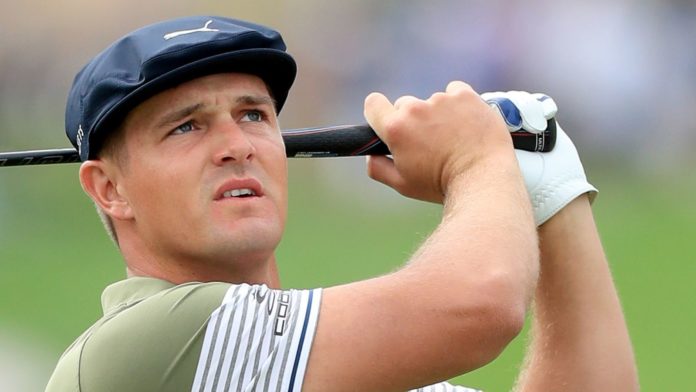 Bryson DeChambeau has admitted his physical transformation into one of golf’s longest hitters has had an impact much quicker than he had previously anticipated.

The six-time PGA Tour winner has added nearly three stone in weight – mostly muscle – over the past nine months, with his attempts to overpower golf courses seeing him move top of the PGA Tour’s driving distance stats.

DeChambeau has posted top-eight finishes in his last seven worldwide starts, including four in as many weeks after the PGA Tour’s restart, with the most recent seeing him register a three-stroke victory at the Rocket Mortgage Classic.

“I didn’t think it was going to make this big of an impact this quick,” DeChambeau said. “I feel like it’s come pretty quick compared to what I was thinking.

“I figure if I work out this hard and I keep going it’s going to take me a year to get up to the speeds that I’m at, but surprisingly I’ve found some methods in the golf swing that allowed me to hit it a little bit straighter than I thought I was going to be able to do.

“Consequently, I just felt like the harder I swing, sometimes the straighter it goes, and that’s been a tremendous benefit of being able to play it out here. Whenever I get a little uncomfortable, I just swing it harder, and luckily the way my golf swing is, the forces lined up a lot better for me.”

DeChambeau’s new-found length has been a major talking point within the golfing world in recent weeks, with the 26-year-old splitting opinions on whether the added distance is good for the sport.

“From my perspective, anything negative that comes my way now I try and look at in a positive light,” DeChambeau added. “I try and view it as a compliment, in a sense.

“When Tiger (Woods) was doing his stuff and dominating, I’m sure there were times when people were criticising him on certain things. I just have to look at it from the light that it’s a compliment that I’m being talked about, and I’m not going to think anything more than that.

“I’m going to sit back and play my game, try and win as many golf tournaments as I can, give myself chances to win golf tournaments, and not focus on the negativity that people are trying to bring to me.

“I’m just going to do my absolute best to play my game and enjoy the benefits of what comes about from playing your best.”

Watch the Memorial Tournament throughout the week live on Sky Sports. Live coverage begins on Thursday with Featured Groups from 12.15pm on Sky Sports Golf.