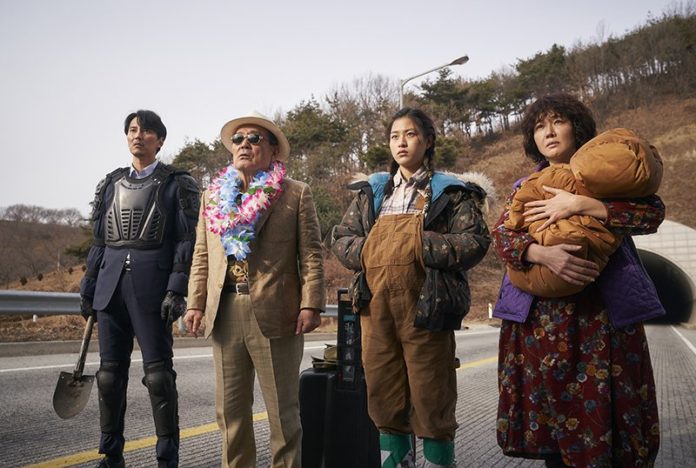 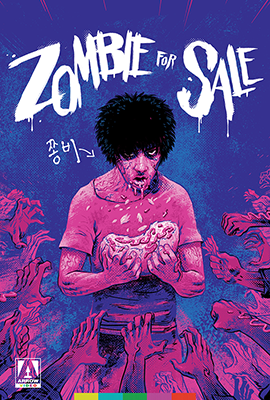 The zombie genre has seen everything from straight horror to big-budget action to romantic comedy and everything in between, but some of the more exciting and unique genre efforts has arrived in the form of Lee Min-jae and Jung Seo-in’s offbeat and downright hilarious Zombie for Sale.

When the illegal human experiments of Korea’s biggest pharmaceutical company go wrong, one of their “undead” test subjects escapes and ends up in a shabby gas station owned by the Park family – a band of misfits spanning three generations who hustle passersby to make ends meet. When the Park family uncovers their undead visitor, he bites the head of their household, who instead of transforming into an undead ghoul becomes revitalized and full of life! The family then hatch a plan to exploit this unexpected fountain of youth, allowing locals to pay to be bitten too, until things go wrong.

Coming on the heels of another masterful South Korean zombie flick, Train to Busan, the story for this film finds a way to lightly touch upon the living conditions of some of the more isolated areas of the East Asian country while still keeping things focused on its central characters and their personal struggles long before Jjong-bi ever arrives in the sleepy little village. Whilst giving an explanation right away for the source of this zombie may take away from the mystery audiences so love for an undead outbreak, it’s just as quickly tossed to the wayside in favor of allowing viewers to relish in the bizarre antics of its characters.

Though many a zombie comedy tends to set the action of the story either moments before the inevitable apocalypse begins or long after its laid siege to the world, the story here makes the smart decision for most of the film to keep everything isolated in this small town and explore a different kind of outbreak and creature of the undead. The evolution of Jjong-bi throughout the film does feel very reminiscent of Isaac Marion’s Warm Bodies and its charming film adaptation, but there’s something that feels more rewarding and less formulaic in this story that makes for a much more enjoyable and original watch.

One of the best elements of the film and its story is the very self-aware tone it frequently displays over the course of its 111-minute runtime, never being afraid to dive into the realm of kooky and outrageous between Jjong-bi being launched by a truck in a cartoonish fashion or Park family patriarch Man-deok initially fighting him off with a toilet plunger to hilarious failure. The zany nature of its characters’ personalities and actions in response to one lone zombie feels very akin to Shaun of the Dead, but rather than the kinetic energy of Edgar Wright’s classic, Min-jae and Seo-in keep things moving along with a steadier pace that allows audiences to catch their breaths before bursting into hysterical laughter again.

The film’s only true faults lie in its story’s pacing near the halfway mark of the film and its somewhat copout ending. The opening 40 minutes or so of the film feels like a perfectly-paced and outrageously funny joy ride, but as the story begins hitting the brakes to focus on its characters versus the impending outbreak, it starts to lose some steam as it feels a bit different than what came before. It’s not inherently a bad portion of the film, as the development of these characters and their family dynamic does prove compelling, but it feels somewhat out of place in comparison to the opening drive of the film.

Overall, Zombie for Sale may have moments of unoriginality, but thanks to some of the most stylish direction from a debuting filmmaker, a fresh and outright hilarious script, wonderful characters, and performances from its entire ensemble and a unique take of the zombie genre, it proves to be one of the most exhilarating efforts in recent years, making for a damn good time.