Home Culture Cleaners who removed COVID-19 artwork on Tube ‘did not know it was... 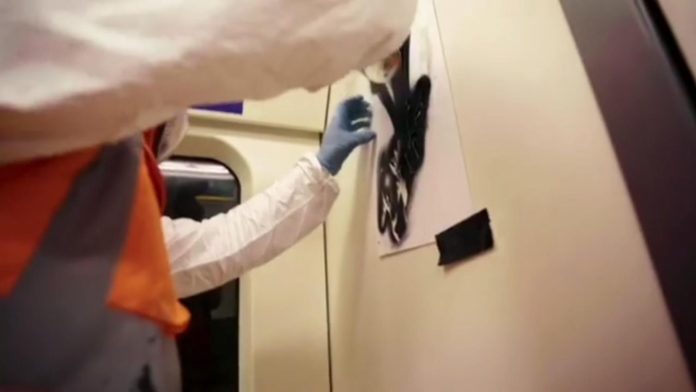 Cleaners who removed a piece of graffiti artwork from a London Underground train carriage did not know it was by Banksy when they scrubbed it off, Transport for London (TfL) has said.

The piece – captioned “If you don’t mask – you don’t get” – featured several of the world-renowned artist’s trademark rats wearing face coverings, while Banksy‘s signature was painted in light blue at one end of the carriage.

TfL said it only became aware it was the work of Banksy after he released a video showing how it was painted, by which time it had already been removed.

The cleaning team, a spokesman told Sky News, was simply fulfilling its contract and following TfL’s policy on graffiti.

He said graffiti on TfL’s trains is not unusual and it is normal practice for the train to be removed from service and cleaned as soon as possible.

The artwork appeared to be encouraging people to wear masks, which TfL said it appreciated as it is something that is required on its services during the coronavirus pandemic.

But the spokesman did not know if there was a discussion about leaving it up to promote their use.

There is also no indication that TfL’s graffiti policy will be reviewed in light of the discovery that one of Banksy’s pieces had been removed without prior knowledge, the spokesman added.

If it changed its policy on graffiti for the elusive street artist from Bristol, it would encourage others to paint on its trains and buses, he said.

Such a move would also require the mayor of London’s consent.

The piece appeared in a video published on Banksy’s Instagram on Tuesday.

The clip showed a man – presumed to be him – wearing a full protective suit, plus goggles, gloves and a face mask, before going through a Tube ticket gate and then preparing a spray paint pump.

In the clip, entitled “London Underground undergoes deep clean”, the man then boards a Circle line train and uses a stencil to paint a rat that appears to be coughing on the inside of the train in-between two windows.

A TfL spokesperson said in a statement: “In this particular case, the work was removed some days ago due to our strict anti-graffiti policy.

“We’d like to offer Banksy the chance to do a new version of his message for our customers in a suitable location.”