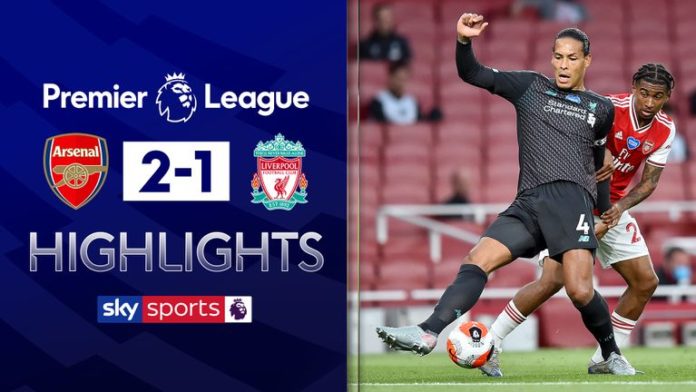 To throw criticism the way of Jurgen Klopp’s Liverpool considering the domestic brilliance they have shown this season seems a bit petty. But we live in a ruthless world.

If the resumption of football in June signalled the start of a new season, then Liverpool would be out of the European spots based on their seven games. Their haul of 11 points from a possible 21 would have them in ninth spot and – up against their usual high-standards – it’s bordering on pitiful if you compare it to the rate of points they had been amassing pre-lockdown. Remember, this is a team that had won 19 of their last 20 Premier League matches either side of a 3-0 defeat at Watford.

Of course, few would begrudge them knocking off slightly for the summer but their drop-off has cost them a chance at creating history. Liverpool’s hopes of breaking the Premier League points record are now dashed with 99 points the maximum they can muster.

But this is probably a case of nit-picking at its finest. Klopp and his boys will not care one iota when that trophy is lifted into the Anfield sky next Wednesday.
Lewis Jones

Mikel Arteta could hardly have been clearer. He was delighted with the spirit and belief shown by his players in their battling win over Liverpool, but he knows those qualities will only get them so far. If the club want to reclaim their Champions League place in the future, serious investment is required.

He made the point in his pre-match press conference but it was in his post-match interview with Sky Sports that he really hammered it home. “There is no magic,” he said. Arteta has transformed the squad’s attitude, but he cannot work miracles with players who are not up to it. “Enormous,” was how he described the gulf between his side and Liverpool.

Arsenal’s financial outlook is not rosy – and that’s before we even consider the implications of the coronavirus crisis. They are already facing a fourth consecutive season outside of the Champions League. A failure to secure a Europa League place would cost them further revenue.

Arteta knows that, but he also knows Arsenal’s hopes of closing the gap on the teams above them rest on strengthening the squad this summer and beyond. His comments after Wednesday’s game were another clear message to KSE, Arsenal’s American owners: If you want to take the club back to the top, you need to pay for it.
Nick Wright

There has been plenty of talk about how Jose Mourinho’s style affects Harry Kane but the Tottenham head coach will point to the raw stats. The Spurs striker’s match-winning double in the 3-1 victory at Newcastle makes it 11 goals in 17 appearances under Mourinho. That’s some return.

Perhaps it could be better. Kane’s failure to touch the ball in the Manchester United penalty area in Spurs’ first game after the restart was well documented. So was his failure to land a shot on target against Everton or Bournemouth. He was limited to just two efforts at Newcastle…

But Mourinho will be delighted with the output he’s getting from his main man as he attempts to mould this Tottenham team into the shape he wants. It’s testament to Kane’s brilliance in front of goal that his strike rate remains high despite Spurs’ recent ups and downs – and not forgetting he’s just back from a six-month injury layoff.

Kane’s latest landmark – 201 goals in 350 club appearances – is a reminder that despite the detractors about his form or his manager’s approach, he remains a stellar striker, whose relentless consistency in front of goal should not be underestimated.
Peter Smith

Pep Guardiola made six changes as Manchester City hosted Bournemouth, potentially with one eye on this weekend’s FA Cup semi-final with Arsenal. Among other things, it presented John Stones and Nicolas Otamendi with a chance to prove him wrong.

Despite City’s defensive injury problems, this centre-back pairing have been picked together only twice all season – and one of those games was City’s calamitous 3-2 defeat at Norwich back in September. Plenty has been said about the club’s failure to replace Vincent Kompany last summer, and perhaps this was a last-chance saloon for both to stake a claim for their City future.

As it was, despite City’s victory, they did little to suggest Pep has been wrong to entrust even midfielder Fernandinho or 19-year-old Eric Garcia at the back ahead of picking them both. With both full-backs bombing on as usual, the defensive responsibility lay with them – and they struggled with Dominic Solanke, Junior Stanislas and Josh King all evening.

To put it into context, no side had previously managed more shots than City in a Premier League game at the Etihad in Guardiola’s four-year reign. The team to break that duck are third bottom, having previously scored 36 goals in 35 games.

“It may be the last time we see Stones in a Manchester City shirt,” said Jamie Carragher after the game. “He was brought in for big money, and it hasn’t quite happened for him.” Will this be the end? Time will tell, but if any further proof were needed City need additional defensive options, this was it.
Ron Walker

When will Dyche get the credit he deserves?

Burnley have lost one of their last 14 Premier League games, a fine run since January which has lifted them firmly into the top half.

This year alone, they have stopped Leicester, Arsenal, Tottenham, Liverpool and Wolves, and their approach is often simple: keep it tight for as long as possible before pouncing.

In fact, Burnley have been goalless at half-time a league-high 13 times, have scored just 17 goals in this 14-game unbeaten run, and have netted just six since the restart.

When you consider Burnley’s spending, and recent injury issues, once again the narrative surrounding Sean Dyche is: should he get more credit?

Dyche had to name four youth team players aged 20 or under on the bench of his depleted side for the 1-1 draw with Wolves, but he continues to work miracles with a thin squad and a tight budget.

The Burnley boss has been at Turf Moor nearly eight years, a lengthy tenure in these days of short-termism, but his continued public criticism of the club’s spending may spell future uncertainty.
Gerard Brand

Chelsea had just about enough to get past an unusually resolute Norwich defence on Tuesday night, but it was a familiar story for Frank Lampard’s side who failed to kill the game despite producing a number of chances in either half, but saw Olivier Giroud’s header enough to secure victory.

They were able to see out victory with ease largely thanks to Norwich failing to register a shot on target across the entire 90 minutes. The Blues still need four more points to guarantee a Champions League spot next season – and against Liverpool and Wolves, two sides far more dangerous than the relegated Canaries, they will not have it so easy.

A fifth consecutive home win, Chelsea’s longest stretch since 2017, should still be a comfort to Lampard, however, with the Blues finding a way to win ugly at least, but on a night where they could conjure only a solitary goal from their 22 shots, they know they must sharpen up in front of goal to guarantee their spot at Europe’s top table.
Ron Walker

Bournemouth will not go down without a fight

Eddie Howe will hope it isn’t too little, too late for Bournemouth to keep their season alive. “Absolutely devastated” was his understandable assessment of a superb performance against one of the Premier League’s best ever teams earning his side zero points. He followed it by saying the harsh reality is performances do not matter at this stage of the season.

Three points adrift from safety with two games to play, it’s now or never for the Cherries; if they do end up getting relegated, they can at least say they put up a fight after their last three games. This was not even back to the Bournemouth of old, it was better.

Manchester City had put 28 goals past Bournemouth in their nine previous Premier League meetings, but there was no sign of a repeat performance in the 10th. They were quite easily the superior side at the Etihad, with Junior Stanislas and Josh King’s pace complementing the strong central midfield trio of Dan Gosling, Jefferson Lerma and Philip Billing.

The club’s only regret if they do slip back to the Championship may be why they did not start playing sooner. It’s not a plucky 2-1 defeat against Man City which will have done it, more the likes of the dismal 4-1 home defeat by Newcastle two weeks earlier.
Ron Walker

In his post-match press conference, Steve Bruce regularly used two words – ‘delighted’ and ‘frustrated’. He was delighted with the performance overall but frustrated with some sloppy defending for Tottenham’s goals.

It’s no surprise either considering the mountain of injuries that are once again piling up for Newcastle. Captain Jamaal Lascelles has undergone an ankle operation while Fabian Schar dislocated his shoulder on Wednesday. Florian Lejeune and Ciaran Clark also remain on the sidelines through injury and just when Bruce did not need it, Danny Rose was ineligible against his parent club.

There was another blow too as the influential Allan Saint-Maximin picked up a calf knock with the last kick of the game, with one of Newcastle’s biggest creative outlets and their most vibrant attacking player possibly out for the last two games of the season.

He was the shining star once more against Tottenham, making driving runs at the heart of the Spurs defence that they often could not contain. He won five fouls – the most of any player on the field – and had six shots, although only three were on target.

In fact, Newcastle had a huge 22 shots compared to just eight from Tottenham but lacked a real cutting edge up front. Shots fired high into the empty St James’ Park stands or straight at Hugo Lloris. Only an inspired effort from Matt Ritchie was enough to beat the Tottenham captain and should Saint-Maximin face a spell out, this is only going to decrease their ability to create.

A lot of credit has to go to Bruce for what he has achieved with Newcastle this season when many wrote him off, but he has once again hit a bad patch of injuries that has only been exacerbated by the heavy fixture list. But as the manager himself said, with two games to go, the Magpies must get their heads down, finish as high as they can and try to regroup for the start of next season.
Charlotte Marsh