Home Lifestyle The Story of Pizzeria Stella’s Survival Is a Story of Moving a... 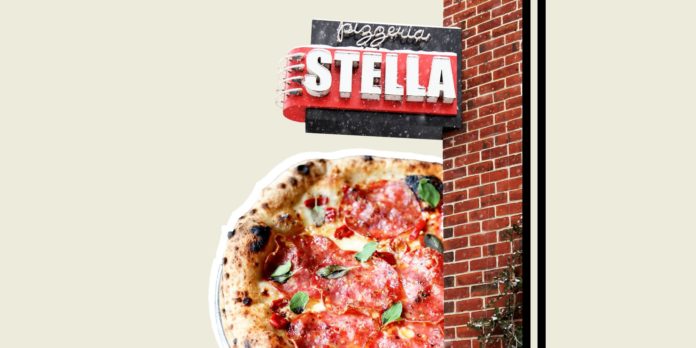 I am sort of embarrassed to say how many times I’ve been to Pizzeria Stella, a neighborhood restaurant with a menu of new-wave Italian dishes as well as flavor-layered specials that wander from Naples to Sicily, with the occasional ingredient reminder that the Tunisian coastline is not far away.

I don’t think I can even count.

What I love about it is everything, from my usual seat at the cool, smooth marble counter in front of the blazing pizza oven to the green-framed café windows that open to Headhouse Square, the prettiest street corner in Philadelphia.

Stella is a fantastic room in every season: breezy in the spring, warm and welcoming in the winter. And I know exactly what the light looks like streaming through the windows from the moment the doors open at 11:30 a.m. until late at night, when the glow is coming from nothing but street lamps, wine, and the moon.

This is the story of how it stayed open.

On Monday, March 16, when Philadelphia bars and dining-service restaurants were ordered to close by 5 p.m., the chef and owner, Shane Solomon, told me he could not just wait it out. He had to do something now. So he and his longtime collaborator, manager Treacy Mueller, put Stella on their backs and dragged it forward, converting their restaurant into takeaway only, with a shared mission of earning enough money to re-employ members of their working family.

There are many logistical problems when an eat-in restaurant converts to take-away—most of their dishes are designed to be eaten immediately and don’t travel well, plus they typically lack the proper packaging because it’s so rarely used. But Stella has the advantage of also being a pizzeria, with the right transport boxes.

Initially Shane and Treacy focused solely on the pizza part of their regular menu, turning an oversized front window into a pick-up counter accessible from the street for the abbreviated hours of 4 to 9 p.m. There was no accompanying press release or marketing-meeting crap. Grass roots, baby: The two of them spread the word through their Instagram accounts, and then they waited.

On the day Shane and Treacy kicked off, I stopped by around 11 a.m. with my friend Conor to wish them luck, and only then did the extent of the ongoing devastation to the city’s restaurant business really sink in: Stella was not just empty, it was deflated, like someone who had let out their last breath.

The back kitchen was dark and eerie, and in the dining room, the tables and chairs were pushed aside, useless. The blinds were down, the front door was closed, and in the adjacent open kitchen, Shane stood solo in the dim light before the wood burning oven, feeding that fiery beast. At 800 F, it can hold more pizzas than most working cooks can keep up with before the crusts burn. The oven can handle nine; the cook maybe six.

But only if he’s good.

After preparing every single ingredient for every single pizza himself, he and Treacy would portion the dough together, a task she kept until they could bring back one of their kitchen family. Then Shane would take up his place in front of the oven again, sliding the long wooden peel in and out, transferring finished pizzas into boxes which Traecy would sell through the makeshift pick-up window.

People ordered. People came. People picked up their boxes through the open window. End of Chapter One.

By March 19, the city’s essential-business shutdown made the hospitality business even harder, allowing only preordered take-away food, with no restaurant entry or direct contact. But by then, Stella was ahead of the game, with its new protocol in place, building momentum.

As Shane and Treacy earned more of their kitchen family back, the once-abandoned Stella dining room became a cranked up production line that would soon sell 500 pizzas in two and a half hours.

By Monday, March 23, when the Mayor issued the shelter order further limiting our city’s mobility, Shane and Treacy already had an expanded takeaway menu designed to balance the number of prep cooks they had back at work with dishes that fit the needs and mood of their neighborhood.

As father to three, Shane knows his way around family food. Suddenly his wood-fired polpette—an herb-heavy mix of ground beef, pork, and veal balls with ricotta and grated Grana Padano, always served on their own in a shallow bowl as part of the antipasti section—became the red sauce classic: spaghetti and meatballs.

Plus, he added a baked mezze rigatoni (with three cheeses, Sicilian oregano, and marinara sauce) in a reheat-able tin, another old-school dish that has never appeared on the regular Stella menu. But right now, because the guy cooking pasta is also washing dishes, Shane needed a prep-forward dish—something that might take a long time to get ready when the takeaway window is closed, but could assemble quickly when the ordering pressure is on.

Finally, for housebound children–and their parents—who need a project, he turned his pizza into a kit: grated Parmesan and shredded mozzarella, sauce, pepperoni (or not), and a dough ball plus a little container of flour to roll it out on.

Chefs who make pizza are obsessively fussy about their dough. Before Stella opened, Shane went through a lengthy trial-and-error period to arrive at the formula he uses today, more than a decade later. Averaging three recipes a day, five days a week for two months, he says he tried every kind of flour on the planet in every imaginable blend and hydration proportion (how much liquid was added). Stella’s dough is created for expert stretching followed by a high-heat, wood-fired oven, emerging lightly charred and perfectly chewy with a unique smoky flavor. But now, with the egalitarian spirit of an open-source coder who makes his program available for anyone to modify, Shane shares his dough with five-year-olds who pat it into heart shapes, sprinkle it with sauce and cheese, and bake on the back of a cookie sheet in their mom’s oven.

In this extraordinary time, I believe in paying attention and taking inspiration where I find it. I like to think that Shane and Treacy are firing up more than pizza for my community, giving us something more important than food as a takeaway. That’s how Stella makes me feel right now. I know there are other restaurant leaders with grit and grace in other cities, doing everything they can to restore income to their work families. This is one story about what two people did in my city. And I thank these quietly heroic citizens, who feed us, for their service.

All of them, everywhere.