Home Sport Demi Stokes: We can do more for young black girls 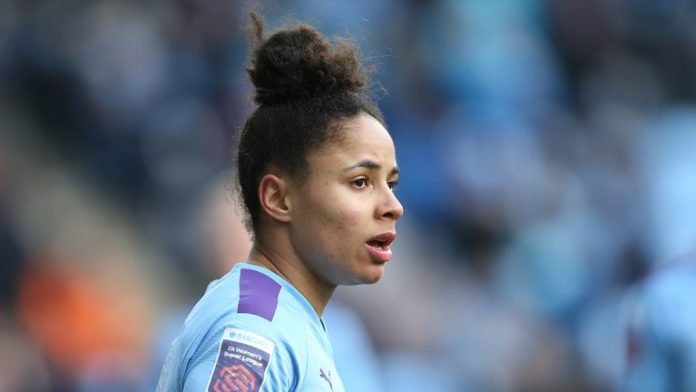 Manchester City and England international Demi Stokes believes women’s football can do much more to increase the number of black players playing professionally.

Stokes says football, and society in general, is “waking up” to issues of racism and is encouraging people to continue challenging and having “difficult conversations”.

The left-back, who was part of England’s World Cup squad last summer, says she has never been subject to any racism as a professional but did experience it in her first ever match as a young player.

Reflecting on the issue of racism in sport and society, Stokes told Sky Sports News: “It’s always been there, it’s not like it just cropped up. We’re waking up to it and people are realising there is actually a problem.

“The more people speak about it, the more we can try and solve it. It’s about having difficult conversations and challenging people. We all need to be better and we all need to hold ourselves accountable.

“It’s a worldwide issue, it’s happening everywhere. Until we address the problem as a whole, we can’t just address it in football. Racism is racism wherever it happens.

“In the women’s game, there are not many black players. We can be better at giving young black girls an opportunity and it starts from grassroots. There are many different avenues we can take.”

Stokes praised the Premier League for continuing to take the knee at the start of each game since the competition restarted, but believes there is a lot more work still to do.

“It’s good that the Premier League are doing that, all these little nuggets will help but it’s not going to change unless we keep the ball rolling,” Stokes said.

“It’s about keeping that momentum and keep challenging. We don’t want it to be good and then just go.”

City, who missed out on the WSL title after being overtaken on points-per-game by Chelsea following the league’s suspension, returned to training last week ahead of the new campaign.

For Stokes, whose last competitive game was against Chelsea back in February, re-joining her team-mates after months apart was a hugely exciting moment.

“It felt like the first day back at school when you get all your uniform ready,” Stokes said. “I had my bag ready and all my kit laid out. It was like being a little kid again. It almost gives you your identity back.”

It has been all change at the top for City during lockdown, with new manager Gareth Taylor coming in to replace Nick Cushing, who left to join the coaching staff at New York City FC in February.

“It’s what the team needed. I think he’ll push us and we can push him.”