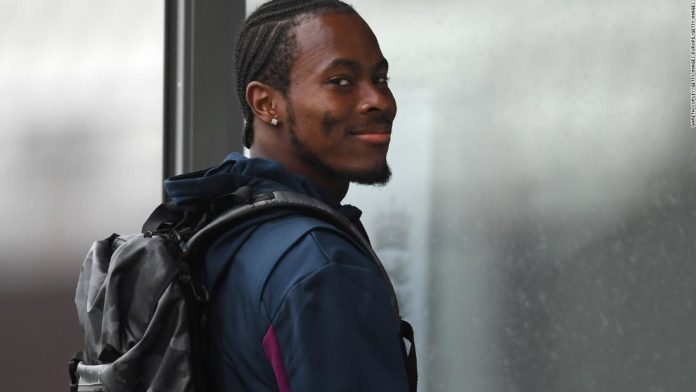 The ECB did not specify the nature of the breach.
The three-match home Test series against West Indies is being staged behind closed doors in a so-called bio-secure “bubble,” meaning players are restricted to living in the hotels of the two grounds being used — Ageas Bowl in Southampton and Emirates Old Trafford in Manchester — and are subject to regular Covid-19 tests.
The Guardian reported that Archer stopped off at his flat in Hove, Brighton, traveling between Southampton and Manchester.
The 25-year-old, who has taken 33 wickets in eight Test matches for England, had been named in the 13-man squad on Wednesday for the second Test Match which begins in Manchester, England on Thursday.
READ: TV commentator brought to tears by ‘dehumanization of Black race’
Archer will now have to isolate for five days, during which time he will take two Covid-19 tests, both of which must return negative results before he can return to the England squad.
West Indies team said they were “satisfied with the measures that have been imposed.”
“I am extremely sorry for what I have done,” said Archer in a statement.
“I have put, not only myself, but the whole team and management in danger. I fully accept the consequences of my actions, and I want to sincerely apologize to everyone in the bio-secure bubble.”
“It deeply pains me to be missing the test match, especially with the series poised. I feel like I have let both teams down, and again I am sorry.”
England trails the three-Test Match series 1-0.