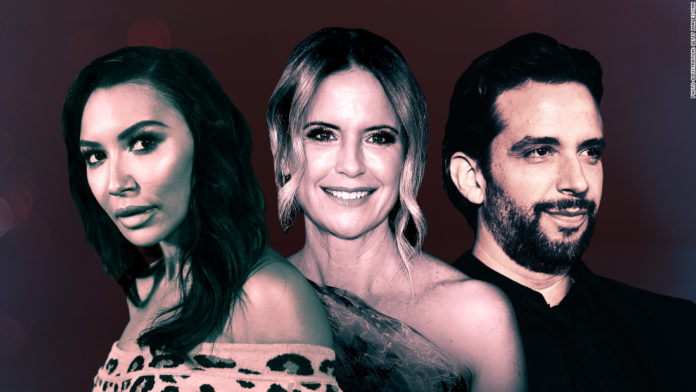 On one hand, stars are usually not people we actually know.
Yet on the other hand, they’re in our everyday lives through their art, the best of which lets us see ourselves reflected on screen or in song, creating a sense of connection.
It’s why their loss can knock the wind out of us. And grief, whatever the source, feels amplified these days.
Such was the case this week with the deaths of actresses Naya Rivera and Kelly Preston.
The two women occupied different spaces in our popular culture, but sadness over their untimely deaths felt shared by many.
With Rivera, the “Glee” star who drowned at 33 after an ill-fated boat ride with her 4-year-old son on Lake Piru in Ventura County, California, the news came six days after her disappearance.
Friends, family and fans held out hope against hope that Rivera would be found safe.
The photo of those who knew and loved her best, including some of her “Glee” cast members, holding hands at the lake on the day her body was recovered was devastating.
Perhaps it was the agonizing days’ wait for her recovery, or her being the third “Glee” star to die tragically, or her being a young, single mother that makes her death feel especially poignant.
I haven’t stopped thinking about Rivera’s little boy, Josey, who authorities now believe she “mustered enough energy” to get back onto their boat, even as she was unable to save herself.
Preston was also a mom who left behind 20-year-old daughter, Ella, and 9-year old son, Benjamin, when she died this week after a private two-year battle with breast cancer.
She was 57.
Her husband, John Travolta, focused on their kids in his statement mourning her loss.
“I will be taking some time to be there for my children who have lost their mother, so forgive me in advance if you don’t hear from us for a while,” he wrote on his official Instagram account. “But please know that I will feel your outpouring of love in the weeks and months ahead as we heal.”
Though Preston had appeared less frequently in projects in recent years, she was beloved for her performances in “Jerry Maguire,” “Twins” and other films.
She and Travolta had one of Hollywood’s most enduring love stories.
His tribute to his wife on Instagram reminded me of Amanda Kloots, who’s been using the same social platform to share about the lengthy battle with Covid-19 her husband, actor Nick Cordero, fought before he died earlier this month of complications from the virus.
This week Kloots was back there to share with her followers about the memorial service held to bid Cordero farewell.
In a time when so many of us are experiencing great personal loss, Cordero, Rivera and Preston’s deaths, perhaps, reminded us that we grieve together.

– The focus on high-profile Bollywood stars who have contracted coronavirus has raised attention regarding the spike of the disease in India.
– Nick Cannon’s not backing down after ViacomCBS fired him for anti-Semitic remarks he made during his podcast.
He’s been retweeting both his champions and his critics over on his verified Twitter account and is now demanding full control of his “Wild ‘N Out” brand from the company (he had hosted the show on MTV since its debut in 2005).
Cannon also apologized to the Jewish community on his Facebook page.
– Raise your hand if you want Tyra Banks to announce the eliminated contestants on “Dancing With the Stars” by holding photos and saying “X amount of beautiful couples stand before me, but I have only X amount of photos in my hand” like she used to on “America’s Top Model.”
ABC has gone in a new direction since co-hosts Tom Bergeron and Erin Andrews are now out, and Banks is in as the new host and executive producer of the reality dancing competition.
My vote is to make the “DWTS” contestants undergo makeovers so we can see who cries over their new looks.
– Someone please tell us the real deal going on over at “The Real.” First Amanda Seales announced last month that she was leaving as a co-host of the daytime reality show, and this week Tamera Mowry-Housley has announced she’s exiting after six years on the show.
Is her twin Tia available? Because that would feel like a seamless replacement.
– Who puts carpet in their bathroom? Demi Moore does and people can’t stop talking about it.
Here’s hoping the men in the house have good aim.

Something to watch: The lives of child stars offer endless fascination, and the HBO documentary “Showbiz Kids” will without a doubt give you something to mull over.
Directed by former child actor Alex Winter, it takes an in-depth look at the toll Hollywood can take on some of its youngest performers, with candid interviews from those who lived it and made it through to the other side . (HBO is owned by CNN’s parent company.)
Something to listen to: Neil Gaiman’s “The Sandman” may not be on the screen yet, but this week Audible debuted a star-studded 10-hour-plus presentation of the comic book series.
James McAvoy, Riz Ahmed, Kat Dennings, Taron Egerton, Samantha Morton, Bebe Neuwirth, Andy Serkis, and Michael Sheen are providing the voices — and it’s music to the ears of all the fanboys and fangirls who have long awaited an adaptation of the series.
Something to talk about: The word of the year may be “entanglement,” thanks to Jada Pinkett Smith using it to describe her brief relationship with singer August Alsina years ago while separated from husband Will Smith.
The memes and dissection of the reconciled couple’s”Red Table Talk” are still coming one week later. This begs the question: Would there have been as much interest if Smith had confessed he had had an outside relationship while they were married?

Speaking of memes, remember to wear a mask and clean your microwave.
Yes, those two things can, in fact, be connected as I explain here:
Pop back next week, why don’t you?