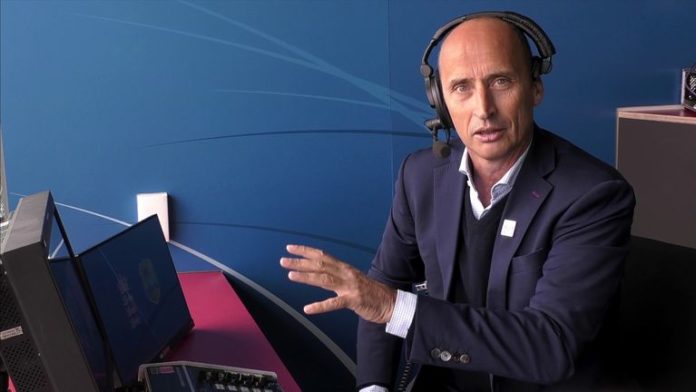 England failed to lay down a marker in the first innings of the first #raisethebat Test as they were razed for 204 by West Indies – something which went a long way to costing them the game.

So, ahead of the second match of the series, Nasser Hussain looked at how the side can start posting big first-innings scores and what is currently stopping them from doing so…

This side did well in South Africa by getting runs on the board and if you have the bowling attack they have they will win Test matches with first-innings runs.

It’s not a complete disaster and it is inexperienced with Rory Burns, Dom Sibley, Ollie Pope and Zak Crawley but that line-up, with Dan Lawrence, is the future, so how do they get better?

There are lots of batsmen getting in and getting out and that is not going to lead you on to getting 300, 400 – that’s going to get you a below-par score.

I think there has been a message sent of ‘just bat time, occupy the crease’ but the best players I played against [scored runs]. Brian Lara, for example, used to sit on bowlers – Steve Harmison, Andrew Flintoff, Simon Jones – and then when the spinner came on, he suddenly jumped out of his bubble and smashed it everywhere. He would work out ‘this is a good time to score’.

England, at the moment, haven’t worked that out. In the last game, West Indies had four great seamers but when Roston Chase bowled on a pitch that wasn’t spinning, wasn’t doing anything, Sibley, Burns and Joe Denly just clipped the ball to midwicket – ball after ball after ball while the four big lads rested and got ready to bowl again.

There was a rumour in South Africa over the winter that Denly had been told to bat 100 balls – and that has cost Denly his place in the side here. He may have done it for the gun middle order but you don’t walk off as a Test No 3 saying, ‘I batted 100 balls’. You have to get 100 runs. That’s the job. I didn’t see Ricky Ponting raising his bat after 100 balls.

What I like about Crawley is that when he went in he immediately played Chase like he was playing for Kent. He was down the pitch and then a few overs last played the reverse sweep. Just because you are playing for England doesn’t mean you play differently.

I think Denly did play differently. He would have smashed Chase everywhere at Kent but I think he has been told to set it up for the middle order. When I got out I didn’t look up and think ‘how many balls did I bat?’ I looked at how many runs I got. That’s the game – get runs, don’t use up deliveries.

It’s about learning when it’s the appropriate time to come out of your bunker, cash in, go back into your bunker, soak it up and then cash in again. That is batting.

Root and Stokes must be ruthless

Joe Root’s stats are fabulous, I can’t pull them down in anyway at all. He is exceptional in everything he does – apart from one thing. Conversion.

I spoke to [England assistant coach] Graham Thorpe in the winter about Root’s conversion rate and he said Root needs to be more selfish. I played against Jacques Kallis and Sachin Tendulkar – they got that glazed look in their eye and said ‘you are not getting me out today’.

Ben Stokes, meanwhile, is an outstanding batsman – he probably has the best technique in the England side – so why is he averaging 36? Stokes is worth so much more to the team than his statistics – think of the World Cup final and Headingley – but how does he improve those stats?

At times, he has developed this soft dismissal of going outside off stump and trying to work to leg. Bowler can bowl wider to him, bowl into his channel and he nicks it.

I like Stokes coming down the wicket. You don’t want a bowler just banging away at a length, you have to put them off. If you go down the wicket, he has to change his length and that takes lbw out of the equation but I don’t get going outside off.

When he was out [in the second innings of the first Test] England were 249-3. Stokes did that and they were bowled out for 313. That was the turning point.

Ben has spotted key moments so well in his career. That was a key moment and if he batted out the day, England don’t lose the Test match

So, why aren’t England getting 400? Inexperience, not converting twenties and thirties, Root not converting fifties and Stokes not quite having the stats and ruthless nature for the ability he has.