Home Sport Derrick Henry’s $50m deal ‘easiest out of any’ 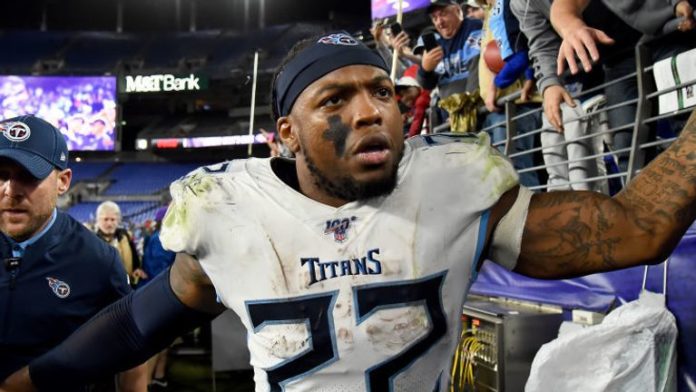 “At six-foot-three, 250lbs we all know come November, December nobody wants to tackle this young man”

Maurice Jones-Drew believes Derrick Henry’s new deal with the Tennessee Titans was the ‘easiest’ to make happen ahead of Wednesday’s deadline for teams to sign franchise-tagged players to extensions.

Henry was one of few tagged players to secure a long-term contract as he and the Titans agreed on a four-year, $50m deal after it had appeared likely he would be heading for free agency in 2021.

The deal comes at a time when there is uncertainty over the NFL’s salary cap in light of the coronavirus pandemic, while handing large contracts to running backs also continues to divide opinion across the league.

Nevertheless, Jones-Drew, who played for nine seasons in the NFL, insists it was a straight-forward decision.

“I think this was the easiest deal out of any deal to get done,” he said. “Derrick Henry literally took the Tennessee Titans all the way to the AFC Championship game running the football.

“I get it he’s a running back but he’s different to most of the guys you see. At six-foot-three, 250lbs we all know come November, December nobody wants to tackle this young man.

“We’ve seen him work, I’ve watched him grow up as he grew up outside of Jacksonville. Very well deserved and all I have to say is ‘mo money, mo money, mo money!’ Derrick Henry, cash that check, baby. Take it all the way to the bank.”

Henry led the NFL in rushing yards last season with 1,540 for 16 touchdowns, before adding a further 446 in the playoffs.

Dak Prescott is meanwhile among those that will be playing on the tag in 2020 after he and the Dallas Cowboys failed to agree on a long-term deal. The quarterback is due to make $31.4m across the next season and will be owed $37.6m in 2021 should the Cowboys place the franchise tag on him for a second time.