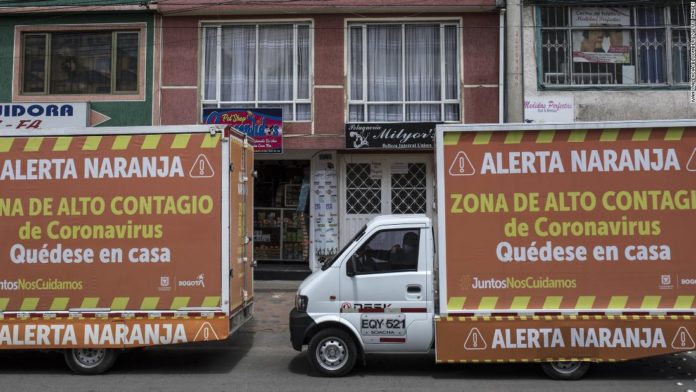 “In communities across Colombia, armed groups have violently enforced their own measures to prevent the spread of Covid-19,” said José Miguel Vivanco, Americas director at Human Rights Watch.
The organization reported several killings which local authorities concluded had been retaliation for not following the measures created by these groups. HRW also detailed attacks on vehicles, threats, and coercion.
HRW said it interviewed 55 people in 13 states in Colombia including community leaders, prosecutors, staff at humanitarian organizations, police officers and local residents. The organization says it also reviewed 20 pamphlets signed by armed groups that appeared to be authentic and worked with other local sources.
One pamphlet from an armed group cited by HRW warned, “Those who fail to comply will be held to account under our law with his own life … Either you comply or you die.”
Groups involved in imposing their own restrictions on local populations at the start of the pandemic included the National Liberation Army (ELN), the Popular Liberation Army (EPL), the Gaitanist Self-Defenses of Colombia (AGC), and other “FARC dissident groups,” HRW said.
FARC, once the largest militant group in Colombia, signed a peace deal with the government in 2016. However, a number of offshoot factions continue to operate in the country.
The ELN says it reached a peace agreement with the government in September 2017, but observance has been sporadic. In January 2019, it claimed responsibility for a car bombing in Bogota that left 20 dead, saying it was in response to government bombing of its camps. More recently, it announced a one-month ceasefire in April in response to the Covid-19 pandemic.
On May 19, the ELN denied allegations that its militants were enforcing quarantines. “The armed lockdown is being imposed by Colombian government’s forces and their intelligence agencies, who are taking advantage of their technological capacity to deceive the public opinion and hide their failures in managing the pandemic,” read a column on the official ELN website, attributed to the Dario Ramirez Castro War Front.
The other groups, unlike ELN, do not have established communications arms.
Colombia has reported nearly 160,000 cases of Covid-19 — the 5th highest number in Latin America, following Mexico, Chile, Peru and Brazil, according to Johns Hopkins University.
Since Monday, officials have implemented new lockdown measures, based on geographic zones for the capital city, Bogota. Additionally, the national government announced the extension of the nationwide quarantine through August 1.
HRW noted that under international law, the government “is obligated to protect the rights to life and physical integrity by taking adequate preventive measures against reasonably foreseeable threats from private actors, including organized criminal groups and other armed groups.”
The Colombian government also has an obligation, it said, to take effective and adequate steps to prevent the spread of Covid-19 and to protect people’s right to health, as well as to ensure the rights to food and water.
“Draconian ‘punishments’ imposed by armed groups to prevent the spread of Covid-19 mean that people in remote and impoverished communities across Colombia risk being attacked and even killed if they leave their homes,” Vivanco said.
“The government should urgently ramp up its efforts to protect these communities, ensure they have adequate food and water, and protect their health from the effects of Covid-19.”
Colombian authorities have not commented on HRW’s allegations on Wednesday, but officials have made similar accusations in the past.
On April 30, Colombia’s Ombudsman Carlos Negret formally asked the Interior Ministry to take action against enforced lockdowns by groups like the ELN, urging the government to increase the presence of Colombia’s Army and National Police in certain areas, and to ensure aid to local civilian populations.
Between March 23 and April 27 alone, Negret’s office had registered up to 72 “violations of citizens’ rights” including murders, arson of vehicles, forced displacement and group kidnappings, he said in the statement.
More than half of these had been perpetrated “in the name of the health emergency,” according to Negret.