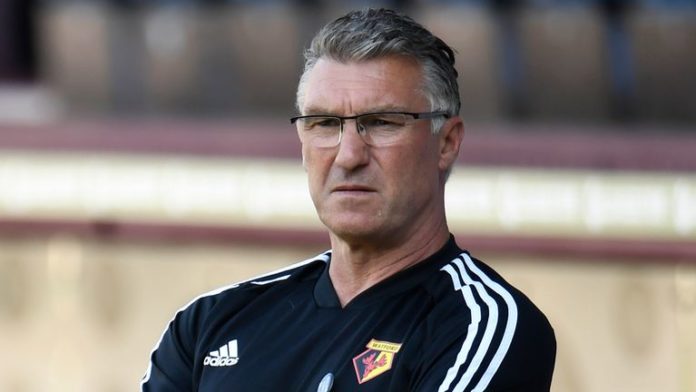 If you had a pound for every time a game was referred to as a ‘cup final’, most football fans would be pretty well-off.

The description can easily lose its substance and fall into a bit of a cliche, but when an unprompted Ismaila Sarr tells Sky Sports it’s how he’s feeling about Friday’s nail-biter at West Ham, he has good reason, with the culmination of a great escape from Premier League relegation the ultimate prize.

His Watford side, FA Cup finalists themselves barely 12 months ago, have faced a very different challenge this season. But after three managers, the dreaded ‘bottom at Christmas’ curse and even a post-coronavirus slump, three points at the London Stadium on Friday Night Football will all-but secure another season in the Premier League, something which seemed more than fanciful when Nigel Pearson took the reins on December 6.

Now, with three games to go, they are three points clear of the relegation zone after back-to-back wins over Norwich and Newcastle, as many victories as they picked up in their opening 18 games of the season.

“I think we were seven points adrift at the bottom when Nigel arrived,” Sarr tells Sky Sports ahead of Friday’s game, live on Sky Sports Premier League. “We had started very badly. It’s a big achievement to get the situation to where it is now, and restart for next season with better ambitions, but we are all really focused to help the team keep ourselves up this season.

“He’s changed a lot of things. First of all, the mentality, and also the balance between the defence and attack. Personally for me, he’s changed a lot, I now am playing regularly and he’s given me his confidence, so I try to do my job in the best way to satisfy this confidence.

“Going to West Ham will be a very difficult, very tough game, we know that, but we are focused on the game altogether to play like a team, improve our quality on the pitch, and we know that it is very much going to be like a final. We’ve prepared for it like that, in the best way.

“Coming into the game after back-to-back wins is very important, because since the restart we had been in trouble, but these games have given us a lot of confidence to fight until the end of the season to stay in the Premier League.

“The mood in the dressing room is better, obviously we needed to win these two games and it’s not easy to do that when the pressure is on but to get two in a row, six points, is very difficult.”

He can’t speak for his team-mates, but confidence is certainly not a quality Sarr lacks. The 22-year-old, often frozen out by the season’s first two head coaches Javi Gracia and Quique Sanchez Flores, despite a £31m summer transfer from Rennes, took no time at all to flourish in Pearson’s three-pronged attack.

Nineteen games and 15 starts later, only Troy Deeney and Gerard Deulofeu have now racked up more goals and assists across the campaign. Not bad work for a winger who had started only two games before the end of November, but has since become arguably Watford’s most potent attacking threat.

His self-belief was highlighted well when Watford thrashed now-champions Liverpool 3-0 in February, the first team to beat them in 13 months. Sarr scored twice and left Andrew Robertson chasing shadows, but when brought out in front of the TV cameras to talk about his sensational performance, complained how he had not been able to complete a hat-trick and take home the match ball.

Those high expectations may have something to do with his relationship with one of his opponents that day; compatriot, close friend and now Premier League winner Sadio Mane, who even trod the same path as a youngster, from Senegalese feeder club Generation Foot to French side Metz.

But his own ability to switch off from the pressure of an intense relegation battle plays a part too. Was he planning to watch Aston Villa’s visit to Everton on Thursday evening, a match which could play a major role in Watford’s survival hopes? “I don’t think so, I would prefer to watch a film,” he smiles.

“I would like to see the result and hope Everton can do something for us, but it’s not a good feeling to be seeing a game and wait for the result to help us – I just want to focus on our result on Friday.

“I like to concentrate on myself, not others. It’s important for me to have this mentality, to have this positive mentality to go into the next game.

“When I first came to this country he said ‘welcome to England’, and told me to do my job in the same way I know, that it’s important to stay as what you are.”

One thing Mane may have struggled to advise his friend on is his frustration in sitting on the sidelines in the early days of his Watford career. At the same age, he was already firing in goals left, right and centre for Red Bull Salzburg, while Sarr, who came straight into the season after a run to the African Cup of Nations final, was given only 167 minutes to impress across the first three months of this season.

“That was the thing which was most difficult for me arriving in England, staying on the bench at first,” he says. “You have the language barrier too, when you arrive, to understand things, even with the [French-speaking] players we have here like Etienne Capoue, and Christian Kabasele.

“But the most important thing is to be on the pitch in the first months, which was difficult because I was staying on the bench so much. Since December I have really enjoyed playing, and I hope I can increase the level of the team in future.”

To celebrate his move to the Premier League, the “best league in the world” in Sarr’s eyes, he bought his father, a former professional turned farmer, a flock of sheep last August. “I don’t know what kind of sheep they are but it’s the right breed – I wanted to make sure he had the best quality sheep,” he said at the time.

They have now been joined by a number of lambs in the early months of this year, perhaps a fitting analogy for Sarr’s blossoming Watford career, and one he never saw going any differently.

This is, after all, a man who turned down Barcelona in 2017 to join Rennes, then a mid-table Ligue 1 club, because he wanted to play. He still has ambitions to reach the top and has called his move to Watford a “window”, which judging by his debut Premier League season may prove very accurate.

But for now, it’s all eyes the prize – West Ham, and Premier League survival. “I have no regrets,” he says. “All of my focus is on finishing the job and keeping us in the Premier League.”