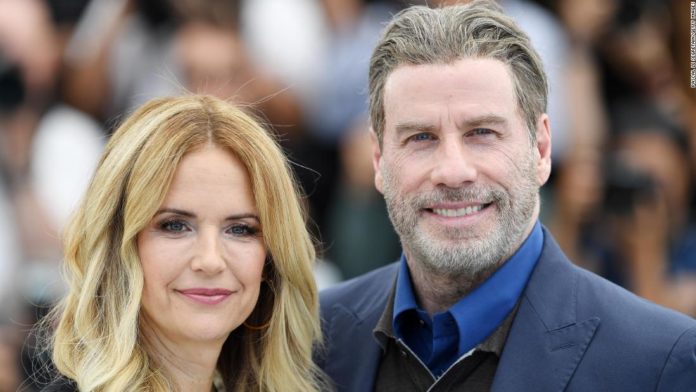 When Kelly Preston screen tested for the 1988 film “The Experts,” she met John Travolta and the pair had to dance together.
Preston was married at the time to actor and her “Space Camp” costar Kevin Gage.
But in 2018 she explained during a “Watch What Happens Live with Andy Cohen” appearance how it was “kinda” love at first sight for her and Travolta.
“Well I was not that happily married, let’s put it that way,” Preston said. “I was really with the wrong person.”
In Travolta, Preston found her person. The pair would have been married 29 years in September. Now Travolta and their two children are privately mourning. Preston died Sunday at the age of 57 after a two year battle with breast cancer.
The couple had an enduring love story in Hollywood — a rarity in the industry — which survived tragedy and celebrated each others’ triumphs.
During an appearance on “Live with Kelly and Ryan,” co-host Kelly Ripa noted that she would often see Preston and Travolta dancing together.
It was a theme which came up often — not surprising given that Travolta was known for his moves in films like the one which made him a megastar, 1977’s “Saturday Night Fever.”
Preston noted dancing with him as well as Travolta’s lips, laughing and having fun as some of the best things about being married to him during her “Watch What Happens Live” appearance.
She said they danced “all the time.
“The kids dance with us, we dance at the house, we go out dancing,” she said. “Yeah, I love it.”
Travolta, she said, was “The nicest guy you’ve ever met. The sweetest,” during that interview.
The admiration was mutual.
They became friends via working together on “The Experts” and that turned to romance.
The couple married in 1991, choosing to elope to Paris after their wedding plans in New York City became unmanageable. They later had to make it official in the states once they learned there were residency requirements to marry in France.
On the red carpet for the 2018 film “Gotti,” which they co-starred in (him playing the famed mobster John Gotti and her playing his wife, Victoria Gotti), Travolta shared the secret for keeping their romance alive with Us Weekly.
“We’re so busy with the kids and our careers and being pro-active in our church,” he said, referring to their membership in the Church of Scientology. “Every day is date night.”
Preston told the publication “I think that we were just right together, that we picked the right people and keeping it honest and communicating and checking in with each other.”
“A relationship doesn’t just happen,” she said. “You have to work at it. You’ve got to keep it fun and that’s what we do.”
They were each others’ biggest cheerleaders, walking the red carpet together over the years in support of each others projects.
Family life was sacred to them after they welcomed son Jett in 1992, followed by daughter Ella in 2000.
Tragedy struck in 2009 when Jett died following a seizure as the family vacationed in the Bahamas.
“The church never left our sides for two years” Travolta told Us Weekly last year about the tragedy. “I don’t know if I would have made it through without their support.”
Their son Benjamin was born in 2010. Preston, then 48 years old, told “Today” in 2011 that it had taken her three years to conceive Benjamin and “I didn’t [consider the risks]. I just considered that it was difficult.”
“I never thought that would be me at all,” Preston said of her pregnancy. “So, I think we’re just really happy that we’re so fortunate.”
The stars reveled in being parents and in that same interview Preston said having her second son had been “wonderfully healing” following the death of Jett.
Her last post on Instagram was a tribute to Travolta on Father’s Day.
“Happy Father’s Day to the best one I know, we love you,” Preston wrote in a caption showing the couple with Ella and Benjamin and a photo of Travolta with Jett.