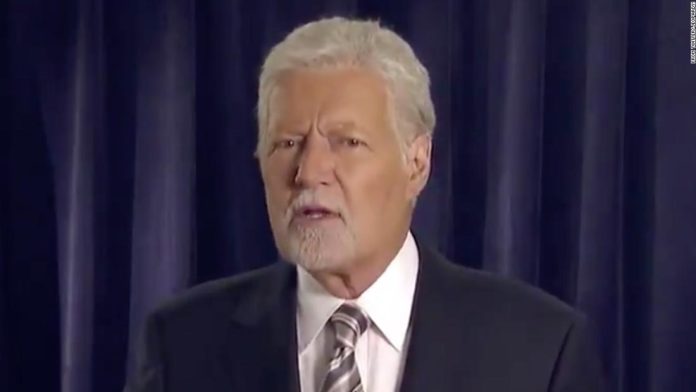 The beloved host of “Jeopardy!” provided fans with an update on both his health and the show on Thursday. And like many other men during the pandemic, he appears to have grown out his beard.
“I’m doing well,” Trebek said in a video posted to the show’s official Twitter account. “I’ve been continuing my treatment and it is paying off though it does fatigue me a great deal. My numbers are good. I’m feeling great.”
“In fact, during the break from the studio, I even wrote a book that will be coming out July 21st,” he added, referring to his memoir that will be released the day before his 80th birthday.
Trebek’s latest update is a welcome sign for his fans who worried about his diagnosis of stage 4 pancreatic cancer. He revealed back in March that he beat the 18% one-year survival rate, but admitted that he’d be “lying if I said the journey had been an easy one.”
“There were some good days but a lot of not-so-good days,” Trebek said at the time. “I joked with friends that the cancer won’t kill me, the chemo treatments will.”
“There were moments of great pain, days when certain bodily functions no longer functioned and sudden, massive attacks of great depression that made me wonder if it really was worth fighting on,” he added.
In Thursday’s update, Trebek also kept “Jeopardy!” fans in the know about some “very special ‘Jeopardy!’ episodes that will be coming up in July.”
“For the first time ever, we are going to open the ‘Jeopardy!’ vaults and take another look at some of our favorite episodes, including the very first ‘Jeopardy!’ show I ever hosted, mustache and all,” he said.
According to an announcement on the show’s website, producers combed through 8,000 episodes to select 20 shows that “highlight key moments, contestants and gameplay over the course of 36 seasons, many of which have not been aired since their original broadcast.”
Starting July 20, fans will be able to watch a week of the best episodes from the show’s first decade. The following week will show highlights from “Celebrity Jeopardy!” featuring stars like Carol Burnett, Regis Philbin and Martha Stewart.
“I can’t wait to return to the studio and start recording shows for the new season in September,” Trebek said. “Meanwhile, my wish for all of you — stay safe.”