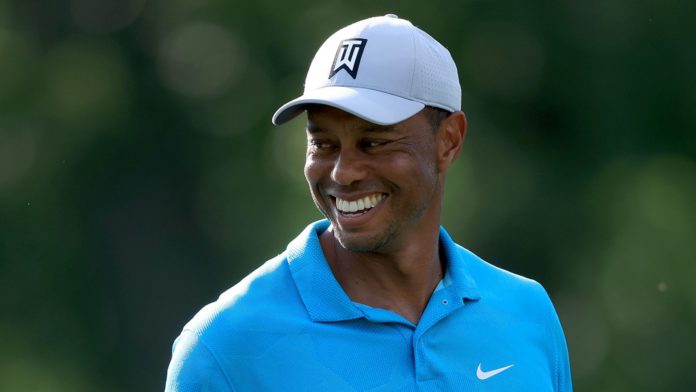 Tiger Woods insisted he did not have an issue with missing energy from the spectators as he reflected on a pleasing, if rusty, first competitive round since February.

Woods had not played on the PGA Tour since he hosted the Genesis Invitational five months ago, and he found Muirfield Village playing firm, fast and breezy as he opened The Memorial Tournament with a solid one-under 71, one of just 24 scores in red figures on day one.

The five-time champion, playing alongside Rory McIlroy and Brooks Koepka, admitted his nerves were fluttering on the first tee, but he made the ideal start with a birdie three, and he then clipped a wedge to tap-in range at the third to move swiftly to two under.

But he got into rough trouble at the sixth and eighth and bogeyed both before settling himself with a nice run of pars which he broke at the 15th, where he came within inches of holing out for eagle with his delightfully-flighted third from over 100 yards.

Sky Sports Golf are offering Sky VIP customers the chance to be part of the virtual golf crowd when the European Tour returns later this month. Join Sky VIP and enter on the My Sky app by July 19th.

Another errant tee shot cost him at the short 16th, but he knocked a solid second to 15 feet at the last and nailed the putt for the birdie which got him back under the card, and just five strokes adrift of leader, Tony Finau.

“It felt good,” said Woods. “I was a little bit rusty, but felt like overall it was a good start. It’s been a while since I’ve played, but I got off to almost an ideal start and got a feel for the round early, I just didn’t make anything today. I had looks at birdies, but I really didn’t make much.

“I was very pleased the way I drove it, my feel for my irons. I just didn’t quite hit the putts hard enough. Most of my putts were dying, didn’t quite have enough oomph to it.

“I would like to have started with easier conditions, the wind was pumping and swirling all over the place, and it was different. It was hot, the ball was running, and when I watched last week it wasn’t doing that, and certainly the practice round it wasn’t doing that. But the golf course has changed. It’s got faster, and it’s only going to continue to get faster.”

Woods has rarely played competitive golf behind closed doors, and he admitted it was strange to not hear the reactions from the galleries, particularly at one of the marquee tournaments on the PGA Tour schedule.

“But I definitely didn’t have any issue with energy and not having the fans’ reactions out there. I still felt the same eagerness, edginess, nerviness starting out, and it was good. It was a good feel. I haven’t felt this in a while.

“I was certainly feeling the edginess and nervousness and anxiousness of playing, and getting out there and feeling something I hadn’t felt in a while, and it felt good.”