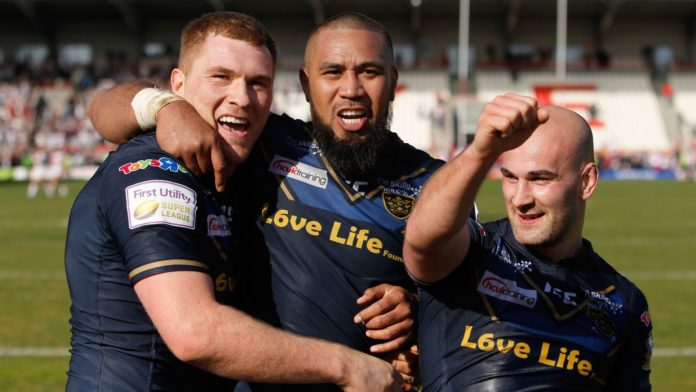 The 2016 season delivered plenty of iconic moments for those on the western side of Kingston upon Hull’s rugby league divide, not least of all a Challenge Cup triumph.

It could be argued, however, the seeds for that Wembley triumph were sown on another of those memorable days, that being the Good Friday derby match which saw Hull FC come from 20 points down with 20 minutes to play to beat Hull Kingston Rovers 22-20.

Certainly, that is the view of Black and Whites hooker Danny Houghton, because up to that point the team had endured a mixed start to the season – including a humbling 46-6 defeat away to Widnes Vikings.

“It was strange because we won the first two games, then lost to Wigan away and got a good thumping in the Widnes game,” Houghton told Sky Sports.

“There were some words from the players to each other that things needed to change in how we were training, what we were doing away from training, on game-day – we all knew we had to improve right across the board probably 20 or 30 per cent to have a chance of competing.

“We beat Wakefield at home and then came back against Rovers and got a bit of belief because we knew we had the players within the squad to compete, but just weren’t doing things the right way.

“I think those words between the players galvanised us as a group and brought us closer together.”

For rugby league fans in Hull, whether FC or Rovers, the clash between the sides from the east and west is the only true derby in the sport on these shores.

The significance of the match is not lost on Houghton, who grew up in the city’s Bransholme area, and he knows as well as anyone what makes those occasions so special for all involved.

“I think it’s because the city divides for that one day,” Houghton said. “Families and friends split, and the nice rivalry battle which tends to be banter rather than fists makes it special.

From the players’ point of view, if you win the game you can walk the streets but if you lose the game you want to bury your head until the week after.

“It’s such a special derby that way in how two teams in the city can be divided across households and friends.”

The 2016 Good Friday clash at Craven Park saw both teams led by former players who had been opposition captains in the first Hull derby of the Super League era in 2007 as well.

James Webster had been appointed interim head coach at Rovers following Chris Chester’s departure after a poor start to the campaign, while Lee Radford was in his third full season in charge of the visitors.

It was the Robins, fresh from their first win of the season five days earlier against Salford Red Devils, who made the better start, though, as converted tries from Ryan Shaw and Ken Sio helped them into a 12-0 lead at half-time.

Another converted try from Iain Thornley and a penalty from John Mantello put the home side 20-0 up with around an hour gone, but when Kirk Yeaman sent Jamie Shaul racing away for Hull FC’s first points of the match it gave them a glimmer of hope.

Then Houghton was on hand to finish from a mesmerising attack from the Black and Whites which featured some superb build-up play and offloading, and the comeback was on.

“I think there were about 15 forward passes in between, wasn’t there?” Houghton joked about his try, adding: “We had to chance our arm a bit, force the offload and throw the ball about a bit – and thankfully it paid off for us.

“Those passes stuck and we got a few calls which could have turned on a different day which helped us over the line.

At 20 minutes to go, it was like ‘If we don’t change something or try something different, it’s probably curtains on this match’.

“But at 20 minutes to go, it was like, ‘If we don’t change something or try something different, it’s probably curtains on this match’. The offload from Kirk to Jamie showed we needed to keep trying it with limited time available.”

Next, Mahe Fonua crashed over from close range to help cut the deficit to just four points and while Hull FC’s confidence was soaring, Houghton had noticed a change in the mindset of their rivals.

“Rovers hadn’t started the season great either and with us getting to within eight points of them, I think they started to sense what we probably would have if we’d been in the same position, that here we go again and we just need to hang on,” Houghton said.

“I think Rovers adapted that style of trying to hang on to the lead rather than go win it, and we had to go the opposite way which I think helped us.”

The Black and Whites drew level with five minutes to go as Steve Michaels went over, and Marc Sneyd’s conversion put them ahead for the first time.

The job was not done yet but Houghton, who was ultimately named as Super League’s Man of Steel in 2016, saw the fortitude in the Hull FC squad, which would serve them so well during the season and in that 12-10 win over Warrington Wolves in the Challenge Cup final, come to the fore.

“We still wanted to keep playing because we still knew they were going to get the ball again and we were probably going to get it back,” Houghton said.

“We didn’t want to go into our shells and not gain enough metres downfield to give ourselves a good chance of kicking into a good position.

“In the same sense, we were still a bit anxious after not starting the season well and not wanting to lose that game, so it was a mixed sort of feeling. But luckily enough we had the right players on the field to manage the game and get us over the line.”