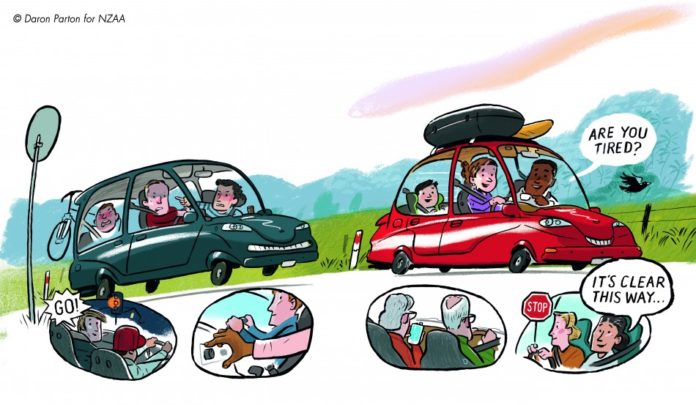 The New Zealand Automobile Association (NZAA) has recently learnt more about how passengers influence drivers’ safety. The research was undertaken last year by the University of Waikato, with funding from the NZAA Research Foundation.

Although common-sense advice on the subject has been around a long time – and researchers have previously studied the safety impacts of different passengers on young and old drivers specifically – there hadn’t been any research into the broader population’s experience.

NZAA Research Foundation Manager Simon Douglas says they wanted to see how strongly theories about passengers’ influence held across a diverse group of New Zealanders and to discover if there were any passenger-driver interactions they weren’t aware of.

A second study observed real-life interactions between 22 driver-passenger pairs who did a 15km trip around Hamilton (the New Zealand city where the University of Waikato is located) that was video/audio recorded.

“The NZAA’s road safety messages have traditionally all been focussed on drivers, but passengers play a role in a driver’s safety too,” says Simon.

“The findings give us some hard data, which is not going to date, that we can use to keep promoting how passengers can help drivers.

“The first hurdle is normalising conversations between drivers and passengers about what each of us finds helpful or not. Often these conversations are best done when people aren’t actually driving because inevitably they’ll involve complaints about each other,” says Simon.

More information about the project is on the AA Research Foundation webpage:
https://www.aa.co.nz/about/aa-research-foundation/programmes/co-driving-complete

WHAT THE RESEARCH FOUND:

The research found that drivers overwhelmingly appreciate hazards being pointed out; directions given in plenty of time so they can respond; and help with all manner of in-car tasks like changing the radio or reaching for a drink so they can keep their attention on the road.

“Drivers prefer passengers that are more aware of the demands of driving – for example who turn down the radio or stop talking at times when the driver needs to pay extra attention,” says Simon.

“An interesting finding was the universal dislike among us all for having our driving style criticised. That’s not to say people shouldn’t point out unsafe driving, nor unsafe or unhelpful passenger behaviour either, but how and when criticism is delivered makes all the difference.

“It was notable that women are less likely to remark on driving related matters, but a large proportion of drivers said they actually would like their female passengers to contribute more.

“Meanwhile drivers found passengers who give continuous instructions on what actions the driver should take unhelpful. Passengers who regularly comment on other drivers’ behaviour were also regarded as more distracting than helpful.”