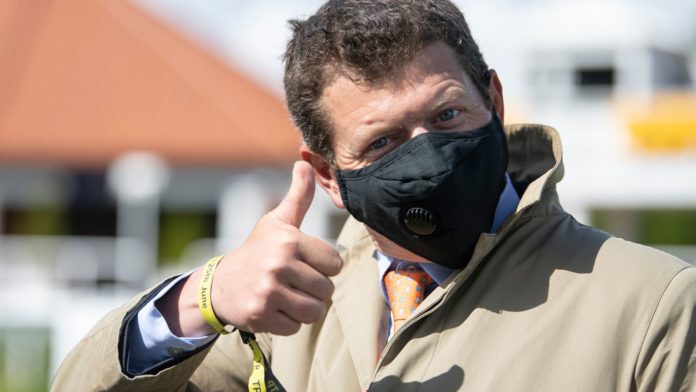 Andrew Balding is under no illusions about the task facing Pivoine as he bids to become only the third dual winner of the John Smith’s Cup at York on Saturday.

Since striking gold on the Knavesmire 12 months ago, the King Power Racing-owned Pivoine has done himself proud in races like the Arlington Million and the Canadian International, but returns to York to defend his crown just 2lb higher in the weights.

Balding said: “Pivoine obviously won the race last year. It’s a very difficult race to win and to win it back-to-back is probably even tougher, but we’ll give it our best shot.”

The six-year-old has not been seen in competitive action since finishing fourth on the all-weather at Chelmsford in February.

“It has been the plan for a while, to come back here,” Balding added.

“I would have liked to have got another run into him as he is a horse who seems to improve with racing, but things haven’t been right for him and at least he had a run in February – it’s not like he’s been off the track for a year.

The Kingsclere handler has a second string to his bow in Good Birthday, who was last seen finishing down the field in the Duke of Edinburgh Stakes at Royal Ascot.

Balding said: “Good Birthday is a horse we’ve always liked, but unfortunately he is drawn out in the car park (stall 22) and he’ll need a lot of luck from there.”

Following a market move earlier in the week, the Ed Walker-trained Caradoc heads the market with some firms.

The four-times winner has run only once so far in 2020 – making late gains to finish sixth on Derby day at Epsom a fortnight ago.

“He’s in very good form and the John Smith’s Cup has been the long-term plan. We had to get a run in prior and I’m hoping Epsom will have brought him on,” said Walker.

“I thought he ran very well (at Epsom) – from where we were drawn we had no option but to drop in and I thought he came home nicely.

“We’ve got James Doyle riding and I think the trip, track and ground are all perfect for him, so we’re excited about his chances.”

At bigger odds, Martyn Meade is hoping for an improved performance from Rise Hall.

He said: “He’s been a bit disappointing the last couple of runs, but we’re going to run him with a tongue-tie.

“There’s nothing wrong with him, but I think it will give him that bit of confidence. Hopefully that will help him.

“He seems to like York. It’s a bit of a cavalry charge, but on his day he’s good.”