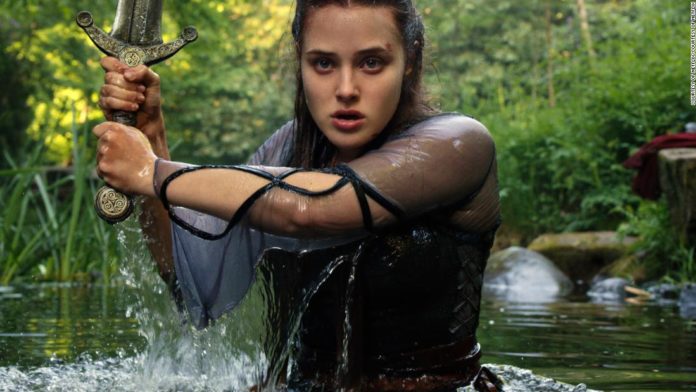 Adapted by Tom Wheeler (creator of the comics-flavored series “The Cape”) from his book with comics-artist-turned-filmmaker Frank Miller, the series handsomely features the expected trappings — bloody battles, wizardly magic and a heroic quest — but puts them together in a fairly tiresome way. It’s not bad, exactly, just lifeless.
Mostly, the show seems designed to fit under the “If you liked ‘The Witcher'” heading of Netflix’s algorithm, but while that title apparently succeeded based on the service’s shadowy viewership metrics, creatively speaking, it isn’t very good either.
In another marketable Netflix tie-in, the series stars Katherine Langford of “13 Reasons Why” as the aforementioned Nimue, who is bequeathed a magical sword by her mother after a bloody assault on their village. She’s told to take the blade to Merlin (yes, that Merlin, played by “Vikings'” Gustaf Skarsgård with appropriately wild-eyed abandon), for reasons unknown.
Along the perilous journey, she meets a young soldier of fortune named Arthur (Devon Terrell), at first a somewhat grudging ally; and must dodge an assortment of perils, among them an order of Red Paladins led by the ruthless Father Carden (“Ozark’s” Peter Mullan).
The names check lots of boxes — including the untrustworthy King Uther (Sebastian Armesto) — though trying to line this up with the “Camelot” or ‘Excalibur” versions of events feels like a fool’s errand.
The most distinctive flourish might be the comic-book-like animation fleetingly used as connective tissue between scenes, a taste of Miller’s contribution that isn’t enough to make “Cursed” more involving. Much of that has to do with the characters, whose back stories are slowly teased out — including more about what makes Nimue special — but remain a trifle malnourished.
Granted, “Game of Thrones” set a high bar for fantasy projects, which hasn’t discouraged Netflix from hammering away at the genre, including “Warrior Nun” earlier this month. It’s worth noting, too, that “Cursed” follows a number of attempts to conjure series variations on the story, including “Camelot” and “Merlin” a decade or so ago.
Even grading on that not-too-steep curve, “Cursed” proves uninspired. For those with an affinity for tales of Camelot, that point of reference and associated expectations might not be a curse, but they certainly aren’t a blessing.
“Cursed” premieres July 17 on Netflix.