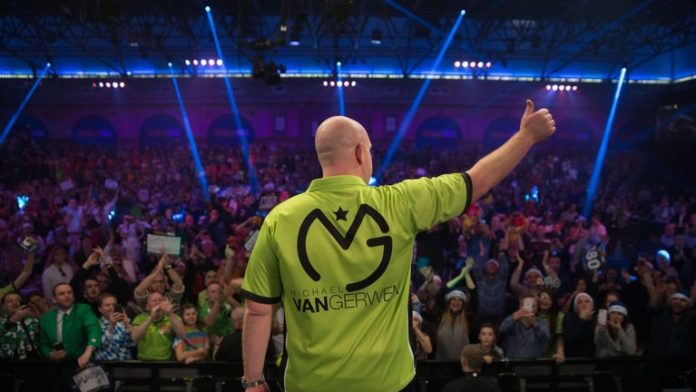 “It’s the same for everyone, we all know the circumstances, we all know what’s happening in the world at the moment but you just need to smile because the tournaments are back on”

By Cameron Hogwood and Michael Bridge

Michael van Gerwen has encouraged everybody to smile as the World Matchplay continues the return of competitive darts following the sport’s hiatus.

Saturday will be the first of nine days of live coverage from Milton Keynes, where this year’s tournament will be held behind closed doors and away from its usual Winter Gardens stage in Blackpool.

A fan-less atmosphere awaits Van Gerwen and his fellow competitors, however that won’t deter the world No 1 from enjoying another step towards darts as he knows and loves it.

“Of course it’s going to be strange, it’s a bit weird to be fair,” he told Sky Sports News. “It’s the same for everyone, we all know the circumstances, we all know what’s happening in the world at the moment but you just need to smile because the tournaments are back on.

“That’s the most important thing for everyone.”

Van Gerwen has endured disappointing Matchplay outings over the past two years, suffering a first-round exit to Jeffrey de Zwaan in 2018 before losing to Glen Durrant in the second round in 2019.

It is however a format he feels suited to, the Dutchman having won the title in successive years across 2015 and 2016 after reaching the final in 2014.

“It’s one of the biggest, I think it’s the third biggest tournament of the year,” he added.

“I treat it like that and I need to make sure I perform well, keep focused, keep relaxed and of course it’s something totally new now. It might help me, I don’t know yet. Nobody has done this before.

The 31-year-old opted against competing in the PDC’s Home Tour during lockdown, although there was little evidence of a lack of match practice last week as he won two of five Players’ Championship events at the PDC Summer Series.

Van Gerwen wasn’t alone in looking like the break may have benefited him, with the players between themselves setting a new record Pro Tour average.

It provided another glimpse of Van Gerwen in action with the new darts he has been using since signing a five-year deal with Winmau at the start of the year.

“Of course everyone knew it was going to be tough for me because I played with my old set (of darts) for quite a long time,” he explained.

“They (Winmau) didn’t make me play with another set of darts, the owner said ‘do whatever you like, make sure you keep winning tournaments, that’s the most important thing for us’.

“I said ‘no, I want to play with new darts’, it gives you a bit of a new vibe as well. We did the launch at the Millennium Stadium, that was great. After that I kept practicing with my darts and I felt comfortable with them.

“You wouldn’t say that after the first eight Pro Tours but I still had belief in them and everyone could see that afterwards, the UK Open, played great with my new darts and since then I keep playing with them.”

As Van Gerwen alluded to, new arrows fared well for him in Minehead where he beat Gerwyn Price in a thrilling final to win the 2020 UK Open.

That was in March, when fans could still turn out in their thousands and players could interact freely in between matches.

The new norm may not include the same electric environment, but Van Gerwen insists it is about how players are able to adapt to the situation.

“If you’re capable of making changes for yourself then it makes it easier when you’re performing and it makes you feel more relaxed,” he said. “Of course people are going to probably benefit from this situation and some won’t.

“You need to take your mind off it. I’m here for 10 days so I brought my PlayStation with me.

“I’m a very big Warzone player and I spend most of my time with that so my phone bill goes through the roof on my 4G because the hotel internet is not too great.

“You sometimes need to get your mind off the darts and make sure you do something you feel comfortable with. That’s what I like, and of course watch a movie on Netflix or go for a run.”

The government announced new steps to ease the coronavirus restrictions on Friday in view of allowing fans to return to stadiums from October.

While excited by the potential return of crowds, Van Gerwen was warned that it should not be rushed.

“It would be great for sports globally,” he said. “Of course you need to take your space. You don’t want to make mistakes because that’s not good for anyone.

“Let the government decide the rules and say whenever it’s allowed and take your time. If you go too quickly now you’re only going to fall back off the ladder.

“We need to be calm and not make any mistakes. Be happy with what we’ve got at the moment and step by step we will all relax. Take your time, if you go too quickly you don’t want to fall off the ladder and start all over again.”

Darts returns to Sky Sports in July, with nine days of coverage from the World Matchplay getting underway on Saturday, July 18, and every day until the final on Sunday, July 26.