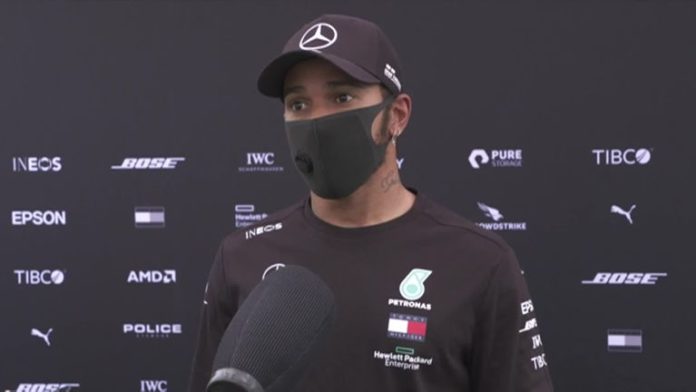 “This is a Red Bull track, it’s just always been really strong for Red Bulls”; Watch P3 at 11am on Sky F1 on Saturday, qualifying at 2pm

Lewis Hamilton has stressed not to “take too much” from Mercedes’ big Friday advantage at the Hungarian GP and believes a “tighter pack” will close in before qualifying.

Although a wet second practice session made predicting a pecking order for the weekend difficult, Hamilton and Valtteri Bottas streaked away from the competition in dry conditions in the morning – half a second clear of closest challengers Racing Point on a harder tyre.

Red Bull, who have been Mercedes’ main rival at the start of F1 2020, were expected to pose the main threat at a track Max Verstappen sealed pole at last year but were over a second off the pace.

But Hamilton was adamant: “I would just say don’t take too much from it.

“Everyone’s doing a different programme out there, in terms of wing and fuel and engine and all these kinds of things. We got through all we needed to get through, it was feeling OK but I think it’s going to be a lot closer in P3 and qualifying.”

More changeable weather is expected over the weekend, and Hamilton believes other teams will be in the mix heading into Saturday.

“I imagine everyone’s going to be a bit more squished together as it’s not a power-dependent circuit,” said the six-time champion.

“The Ferrari engines have lost a lot of power over winter since last year but that shouldn’t be an issue for them, it should more just be down to car this weekend and the downforce, aero and mechanical grip you have.

“So I’m hoping for a tighter pack, it would be great to see the Renaults do well, the McLarens are already doing fantastic so it will be interesting to see how they’re doing this weekend with that great car and Racing Point, they’re doing a fantastic job as well. It’s exciting for me to see.

“And this is a Red Bull track, it’s just always be really strong for Red Bulls so I anticipate it’s going to be a tough battle for sure with those.”

Verstappen, who finished on the podium but a distant third behind the Mercedes at the last race in Austria, admitted Red Bull have a big evening ahead before final practice and qualifying.

Asked about his day, Verstappen said: “Not so good. Plenty to look into. Of course, [it was] a little bit of a shame it was raining in the second practice as otherwise, we could have had a look. But yeah, a lot of work to do.”