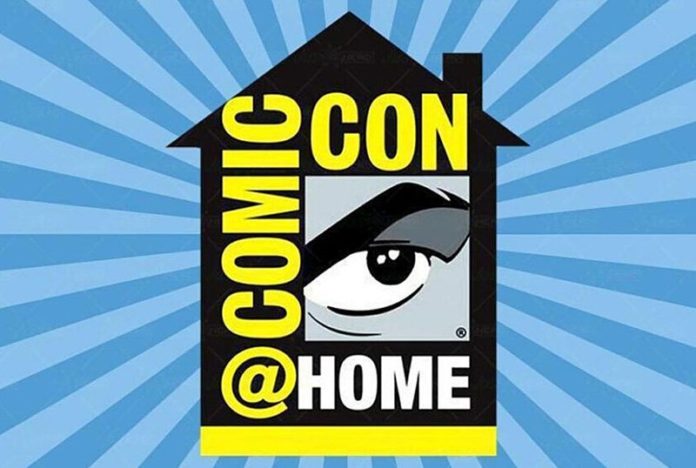 San Diego Comic-Con, the world’s premier event of its kind, has announced details for its first-ever virtual event, [email protected], including how fans can take part!

For the first time in its 50-year history, Comic-Con organizers were forced to make the heartbreaking decision to cancel the annual celebration of comics and pop culture. Soon after the cancelation, they announced an online version to launch July 22, the official start date of the originally scheduled convention. “We’re very excited about bringing Comic-Con online,” said David Glanzer, spokesperson for the nonprofit organization. “And it couldn’t have been achieved without the help and support of so many of our usual friends, and some new ones too.”

The virtual event will exist on the Comic-Con website which, at 9:00 AM Pacific Daylight Time on Wednesday, July 22, 2020, will transform to [email protected] The redesigned Home Page will be the means by which participants can access programming, the Online Exhibit Hall, and various events and interactive elements, as each will be supported by a variety of different platforms. While programming for each day will be available on the website, Comic-Con is working again with Sched.com for those who would like to create their own daily schedule.

Joining in the fun is the Comic-Con Museum which has long planned an interactive component to their efforts. They began offering activities through Comic-Con [email protected] earlier this summer which will continue through the [email protected] weekend and beyond.

YouTube will host over 350 panels and programs as well as the 2020 Eisner Awards. The Online Exhibit Hall, with approximately 700 exhibitors, will exist on the GoExpo by Community Brands page. And for fans of Gaming, those activities will live on the Discord platform.

Fans will be excited to learn that DC Comics, longtime supporters of Comic-Con, will again provide exceptional artwork for the official event T-shirt. The event T-shirt will be accompanied by an assortment of official Comic-Con-related and Comic-Con Museum-related merchandise available on the Merch store page on the Comic-Con website.

Collaborator and sponsor IGN will stream roughly 34 [email protected] panels as well as produce extensive hosted shoulder content, hosted interviews, and more, all in support of the online initiative.

Tumblr will serve as the platform for both the Comic-Con Art Show and the always popular Masquerade. The 46th annual Masquerade will open for viewing Friday, July 24, and winners announced on Saturday, July 25.

Films and anime have long been popular elements at Comic-Con. This tradition continues as both will employ the Scener Watch Party Platform, Funimation will exclusively host all of the anime Watch Parties including Black Clover and Fruits Basket. Scener is a Chrome browser plug-in that will allow fans the ability to simultaneously watch and discuss movies and anime.

Anyone who has visited Comic-Con is familiar with and may have participated in the outside activations (immersive experiences). Even they will be represented as FX will unveil the digital experience: FX UNLOCKED – where fans will engage with virtual activations for American Horror Story, What We Do in The Shadows, Cake and DAVE.

FutureTechLive! returns for a fifth year to present the virtual “World Builders” activation, featuring content by a global community of creators. In this unique experience, participants can explore new worlds in mixed reality, and unleash their imagination to create some of their own!

If that weren’t enough, there will be a number of activities including portfolio review, gaming, a SideWalk Art Challenge, a Cosplay Challenge, the SuperVolunteer Challenge, and even some shared recipes should you need a break and a little sustenance during the [email protected] weekend.

Comic-Con will also be offering an online version of its Souvenir Book, which will be available as a free, downloadable PDF, starting on Wednesday, July 22. The 260-page book contains new art and articles celebrating various anniversaries, including the 100th birthdays of Ray Bradbury and Ray Harryhausen, plus celebrations of EC Comics, Moomin, Jack Kirby’s Fourth World comics, and more. This year’s cover is by William Stout.

“This type of online event is a first for us,” Glanzer continued, “and we are grateful for the support of all involved. Our hope is that Comic-Con can provide a small respite from the confines of various stay-at-home orders. While we can’t be together in person, we can be together online.”