Home Sport Stokes: We will look after Archer 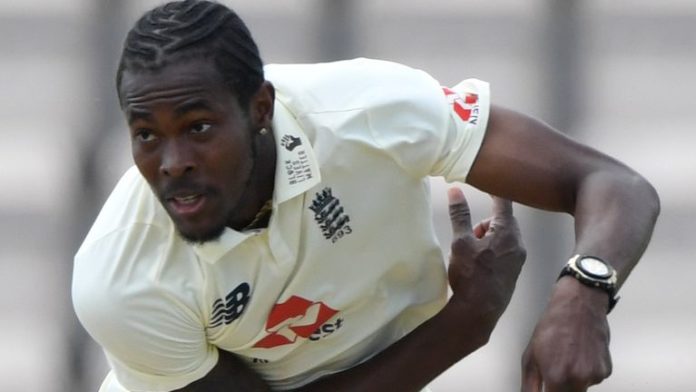 Ben Stokes says the England team will look after Jofra Archer following the seamer’s bio-secure breach which saw him excluded from the second #raisethebat Test against West Indies.

Archer is amid a five-day isolation period in England’s team hotel at Emirates Old Trafford after his unsanctioned trip to Brighton between the first and second Tests.

Stokes told reporters that he and his team-mates will not let Archer feel like he is alone.

“We really need to be there to support Jofra right now,” said Stokes, after scoring 176 for England in Manchester as they ended the second day’s play leading by 437.

“Obviously he’s a big talking point and he is by himself because of everything else going on at the moment.

“It’s making sure that it doesn’t feel like he’s by himself. The worst thing we could do right now as a team is just leave him and see him in five or six days’ time.

“It’s all good being there for people when things are going well and smoothly but what really comes through is how you operate with someone when they need you the most.

“At times like this people are very, very tough and you can feel like you are all by yourself, but I don’t think anybody is going to allow that to happen.

“Jofra’s a massive part of this group, as everybody is. If it was anybody else bar Jofra it would be exactly the same.”

Stokes completed his 10th Test hundred on day two at Emirates Old Trafford and his second score of over 150 in Test cricket – but says he was more satisfied with the time he spent at the crease, having faced 356 deliveries.

“Numbers, figures, I don’t really care. The main number for me is how many wins,” said Stokes, who is now back as vice-captain after stepping up to lead the side in the first Test at The Ageas Bowl with Joe Root absent due to the birth of his second child.

“I was more buzzing that I faced 300 balls than I was when I got to my hundred, that’s something I never thought I’d be capable of doing. The more time you spend in the middle the more chance you’ve got to get runs.

“Being an instinctive player is great but there’s time in the past where I’ve let how I’m playing at the time affect me, thinking I can play some big shots and I’d be alright.

“I feel at an age and an experience level where I really understand my game pretty much all the time and I try not to get carried away.”

England declared on 496-9 – Stokes sharing a fourth-wicket stand of 260 with Dom Sibley (120 from 372 balls) – before West Indies closed on 32-1 with Sam Curran having pinned opener John Campbell lbw for 12.

Watch day three of the second #raisethebat Test live on Sky Sports Cricket and Sky Sports Main Event from 10.30am on Saturday.

Toward the development of a regional emergency program for the prevention...

Livelihood support rejuvenates the activities of farmers affected by the Ebola...