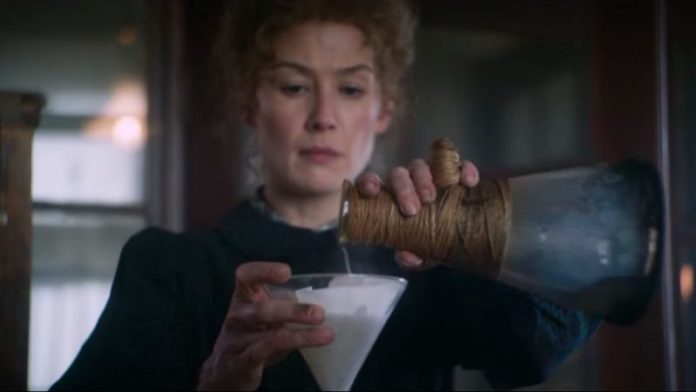 Amazon Prime Video has released a new Radioactive clip from director Marjane Satrapi’s Marie Curie biographical drama film, featuring renowned scientists Marie and Pierre Curie as they present their groundbreaking discoveries. Starring Rosamund Pike, the film will be available for streaming on Friday, July 24. Check out the video in the player below!

From the 1870s to the modern era, Radioactive is a journey through Marie Curie’s enduring legacies – her passionate relationships, scientific breakthroughs, and the consequences that followed for her and for the world. After meeting fellow scientist Pierre Curie, the pair go on to marry and change the face of science forever by their discovery of radioactivity. The genius of the Curies’ world-changing discoveries and the ensuing Nobel Prize propels the devoted couple into the international limelight.

Based on Lauren Redniss’ graphic novel of the same name, Radioactive is directed by Marjane Satrapi from a screenplay written by Jack Thorne. It is produced by Tim Bevan, Eric Fellner, and Paul Webster. The film is a co-production by Working Title Films and StudioCanal in partnership with Shoebox Films.

Marie Curie is a Polish-French physicist and chemist who was the first one to develop the theory of radioactivity, which is a term she coined. She is also best known for discovering two elements: the polonium and radium. Because of her incredible work, Curie was awarded two Nobel Prize Awards in 1903 and 1911, making her the first woman to win the award. At the age of 66, she died in 1934 due to aplastic anemia which was caused by her too much exposure from the radiation during the course of her extensive scientific research.