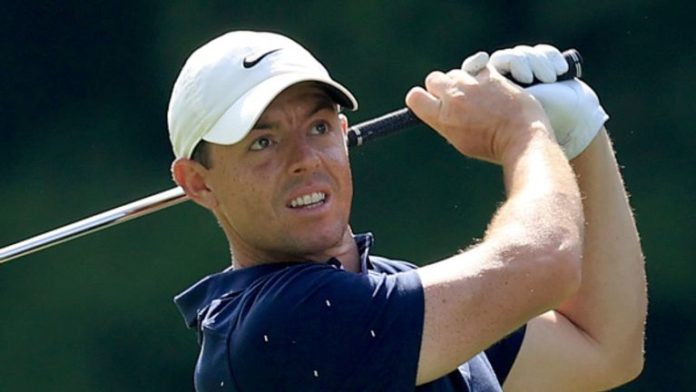 Tony Finau and Ryan Palmer share the halfway lead at the Memorial Tournament, Tiger Woods survived the cut with nothing to spare, and Bryson DeChambeau crashed out in spectacular style on day two.

Finau and Palmer are tied at the top on nine under and one ahead of Jon Rahm, whose bid to dislodge Rory McIlroy at the top of the world rankings gathered pace as he fired a 67 to get to eight under – six shots better than McIlroy himself.

The current world No 1 returned a 72 riddled with inconsistency, and playing partner Woods kept his record of never missing the cut at Muirfield Village intact, although he had an anxious wait to see if he would be around for the weekend after he stumbled to a 76 which saw him slide to three over.

But DeChambeau will have an unscheduled weekend off following an astonishing meltdown at the par-five 15th, where he pulled his drive into water, blazed two shots out of bounds, almost sent a third off the property, argued with two tournament officials before eventually holing out for a quintuple-bogey 10.

DeChambeau’s power-hitting on social media prompted Finau to enter the “ball-speed battle” on Instagram, but he proved he had the brain to compliment the brawn as he recovered from a shaky start to his second round to break 70 for the second day running.

Finau started at 10 and bogeyed two of his first three holes, but the overnight leader repaired the damage with birdies at 15 and 17 and, following a steady run of pars, he picked up three shots over his last five to close on nine under alongside Palmer, who was already in the clubhouse having signed for a five-birdie 68.

“I was really happy with the way I finished,” said Finau, who is making his 112th PGA Tour start since his first, and only victory. “Not the ideal start, but I knew I couldn’t look back after 12, just keep on plugging along and try to hit good shot after good shot, and was able to execute a lot better after that.”

He also admitted to being inspired by DeChambeau’s immense distance in recent weeks, adding: “In the middle last week, my coach Boyd Summerhays and I decided to crank some up a little bit after being inspired by Bryson, seeing how straight he was hitting it and how hard.

“So I decided to crank it up and work on hitting a really hard fade. I’ve let a few go so far this week, and it’s been pretty fun for me to kind of reach back more so than I have in the past and kind of open up and hit some.”

Rahm rolled in his sixth birdie putt of the day on his final hole, just moments after his lone dropped shot, to cap a 67 which earned him outright second on eight under, with US Open champion Gary Woodland two strokes further back after a 70 which featured six birdies but four bogeys.

Former Masters champion Danny Willett made a welcome appearance in the top 10 after he fired a high-quality eight-birdie 66 to jump to four under alongside current US Ryder Cup captain Steve Stricker (67) and his predecessor Jim Furyk (68) – a remarkable achievement for two members of the PGA Tour Champions.

McIlroy did well to get round in 70 on Thursday despite not having his best stuff, but he got off to a woeful start to his second knock as he followed a bogey at 10 with a double-bogey seven at the 11th, including a pulled drive into water and a fluffed chip for his fifth.

But he battled back and enjoyed the shot of the day at the fifth, a towering 270-yard five-wood that set up an eagle from eight feet, although he then three-putted the ninth to end the day where he started, and he now has seven shots to make up on the leaders.

Playing partner Woods admitted he began to have issues with his movement during his warm-up, and he lack of freedom in his swing was clear during a scrappy 76 that sent him plummeting to three over, which was one stroke outside the projected cut line at the time of signing his card.

But the cut moved to three over late in the day, which was good news for Woods and former world No 1 Brooks Koepka, who double-bogeyed his final hole for a 75, while Xander Schauffele and 2018 Masters champion Patrick Reed were also among the lucky pros on +3.

However, DeChemabu was not the only big-name player to crash out as he was joined in an early exit by the likes of Paul Casey, Justin Rose, Rickie Fowler, RBC Heritage winner Webb Simpson and Travelers Championship winner Dustin Johnson, who failed to break 80 in either round.