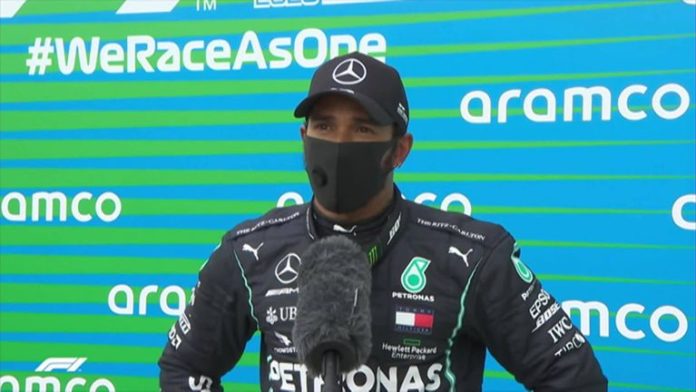 Lewis Hamilton claimed pole position for the Hungarian GP by edging out Valtteri Bottas as Mercedes streaked clear of their rivals, with Racing Point locking out the second row.

Mercedes have been the class of the field throughout the Budapest weekend and were even more dominant in Saturday’s shootout, and with Red Bull fading completely out of the fight, Q3 turned out to be a head-to-head battle between Hamilton and Bottas, winners of the two F1 2020 races so far, for pole.

While Bottas improved on his final lap, it wasn’t enough to beat an in-form Hamilton – who took an incredible 90th F1 pole by acing his last effort with a 1:13.4, a tenth ahead of his title rival and team-mate.

“What a car that must be to drive,” remarked Sky F1’s Martin Brundle.

Brundle also said Mercedes were in a “league of their own”, a statement backed up by their huge advantage on Saturday – almost a second ahead of their closest challenger.

That turned out to be Lance Stroll in the fast Racing Point, with Sergio Perez just behind as the Silverstone-based outfit, whose car has been protested by Renault due to its alleged similarities to last year’s Mercedes, shone.

Ferrari sealed their best qualifying result of the season with Sebastian Vettel and Charles Leclerc locking out the third row, while Red Bull – fancied coming into the weekend as pole contenders – endured a painful Saturday.

Max Verstappen, on pole last year, will only be seventh on the starting grid at the Hungaroring in 2020, and team-mate Alex Albon was knocked out in Q2, only 13th in a particularly twitchy RB16.

He was even out-qualified by George Russell, with the young Englishman – who has recently confirmed he will stay with the Grove team for 2021 – starring. Both Williams cars made it through to Q2, for the first time since 2018’s Italian GP.