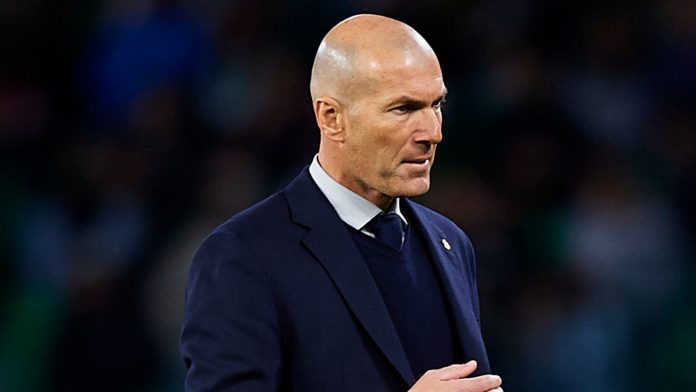 Zinedine Zidane has cast doubt over his future as Real Madrid head coach.

Real confirmed themselves as La Liga champions this week when they beat Villarreal 2-1 and second-placed Barcelona lost to Osasuna.

Zidane has just under two years remaining on his contract, but refused to guarantee he would still be at the Bernabeu beyond this season.

“I have a contract here but you never know what will happen,” said Zidane.

“I am not talking about what’s going to happen next season or the following year. I have a contract, I am happy here, and I am happy with what I am doing but you never know what will happen in football.

“That’s why I feel so relaxed with my future because in the world of football things could change overnight. I don’t know what’s going to happen in the future. I am happy with what I am doing here and we will see for how long.”

As Real have wrapped up the league title, they will now turn their attention to the Champions League, which gets underway again next month after being postponed because of the coronavirus pandemic.

Zidane’s side face a second-leg last-16 tie against Manchester City, who won the first leg 2-1 in Madrid back in February.

It will be a tough task for Real to overturn the deficit in Manchester as Zidane looks to maintain his record of never being eliminated from the Champions League.

“We know how difficult the match is going to be,” he added.

“The first leg was already complicated, so it is going to be pretty much the same in the second leg. It doesn’t change what we want to do.

“We are going to fight until the last minute, the last second of the tie, don’t have doubts about it. Then, nobody knows how it will end. “