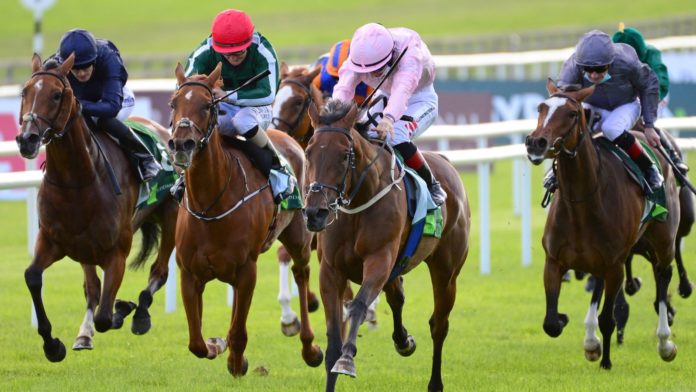 Even So gave trainer Ger Lyons his second Classic triumph of 2020 with a game success in the Juddmonte Irish Oaks at the Curragh.

Stepping up to a mile and a half from 10 furlongs proved no problem to the daughter of Camelot, who got on top in the final furlong to run out a ready winner.

Even So (10-1) was ridden by Colin Keane, who partnered the Lyons-trained Siskin to victory in the Irish 2,000 Guineas last month.

The Aidan O’Brien-trained pair of Snow and Laburnum had made the running into the straight, when the complexion of the race changed.

Cayenne Pepper, the 2-1 favourite, struck the front for Jessica Harrington and Shane Foley, but Even So – who is jointly-owned by Sue Magnier and Paul Shanahan – joined her and appeared to outstay her rival in the final furlong, crossing the line two lengths to the good.

Passion, from the O’Brien stable, was half a length back in third, but the Ballydoyle handler’s other runner, Ennistymon, was the disappointment of the race. The Epsom Oaks and Royal Ascot runner-up was at the rear throughout and finished last of the eight, never able to get into contention.