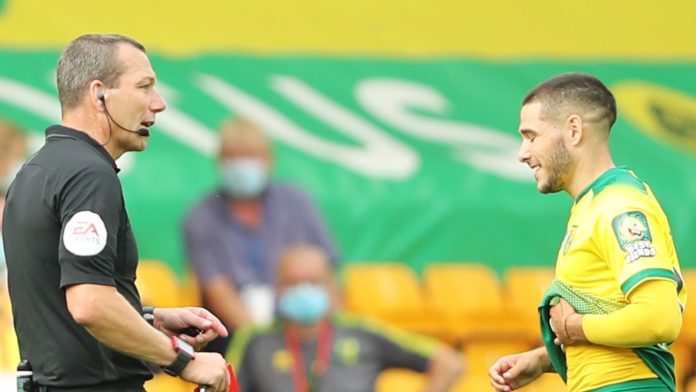 Norwich had two players sent off as a Chris Wood strike and a Ben Godfrey own goal kept Burnley in European contention with a 2-0 win at Carrow Road.

The relegated Canaries, who had come close to frustrating Chelsea at Stamford Bridge earlier in the week, started encouragingly but shot themselves in the foot when Emi Buendia was dismissed by VAR for aiming an elbow at Ashley Westwood (36), before Josip Drmic followed him down the tunnel for a late challenge on Erik Pieters (45).

Burnley then compounded the hosts’ nightmare first half when Wood grabbed his 13th league goal of the season with an overhead kick from Johan Gudmundsson’s cross moments before the interval.

After half-time, the Clarets struggled to create the intensity to regularly test Tim Krul despite their two-man advantage, but were handed a stroke of good fortune when Godfrey controlled Pieters’ cross beyond his goalkeeper (80), to confirm a miserable afternoon for the hosts in their final home game ahead of their impending relegation and a ninth consecutive defeat.

Man of the match: Chris Wood

Burnley, the first of the teams in European contention to play their penultimate game, rise to ninth, a point off seventh-placed Tottenham in the final Europa League qualifying spot, albeit with a vastly inferior goal difference, while goalkeeper Nick Pope’s 15th clean sheet of the season set him ahead of the trailing pack in the race for the Golden Glove.

Norwich prove own worst enemies as Burnley march on

Previously porous Norwich had shown against Chelsea in midweek they could put on a defensive display when required, but having failed to register a single shot on target in west London, improvements were required at the other end of the pitch.

On the early evidence, they looked like being delivered. Twenty minutes in, Godfrey’s header from a corner was kept out by a smart stop from Pope, before James Tarkowski kept out Alexander Tettey’s effort on the rebound with a vital block.

But any hope of showcasing how the Canaries may bounce back from the Championship next season was dealt a blow 33 minutes in. Westwood put an arm around Buendia’s waist as the restored midfielder looked to get away, and in response was met with a blow to the head from his elbow.

While the Burnley man clearly made the most of the contact, VAR left the ultimate decision up to on-field referee Kevin Friend, who went to his back pocket to dismiss the Norwich danger man after reviewing the incident on the pitchside monitor.

“It’s unnecessary, no doubt about that and he can’t have too many complaints,” said former Canaries forward and Sky Sports pundit Efan Ekoku.

Emi Buendia returned for Norwich for Luka Rupp, with Teemu Pukki again named on the bench.
Burnley also made one change, bringing in Johann Gudmundsson for the injured Charlie Taylor.

One became two in first-half injury time when Drmic, perhaps out of frustration, flew into a challenge on Pieters, and while he did not make significant contact with the defender, could not have too many complaints about following his team-mate down the tunnel.

Worse would still follow before the break as Gudmundsson recycled a wasted cross by finding Wood at the far post, and his overhead kick snuck in at Krul’s near post to add insult to injury on a nightmare 14 minutes for the hosts.

After half-time, and a change at the break from Daniel Farke, it looked like it could be a matter of how many Burnley would score – and Wood could have doubled his tally within minutes of the restart but sliced Westwood’s excellent diagonal pass well wide.

While Norwich remained compact with two banks of four, Burnley did nowhere near enough to test the beleaguered hosts and it took more than 20 minutes for them to pull the next save out of Krul, who turned Jay Rodriguez’s shot behind after a deflection from Christoph Zimmermann.

In fact, it would need a helping hand from the Canaries to eventually double the lead. Pieters’ ball into the near post was misjudged by Godfrey, whose first touch took it past his goalkeeper to compound a miserable afternoon.

Another two quick-thinking saves from Krul kept the scoreline respectable late on, but both sides were happy to hear the full-time whistle on yet another tough afternoon for Norwich.

Man of the match – Chris Wood

There were few stand-out performances at Carrow Road but Wood’s was the one that showed the quality to break the deadlock.

He was typically combative too, winning six aerial duels against Timm Klose and Christoph Zimmermann, and perhaps should have had another goal but missed a presentable second-half opportunity.

Norwich will end their season-long Premier League stay by visiting Manchester City on the final day, next Sunday, at 4pm.

The curtain will come down on Burnley’s campaign with a home game with Brighton at Turf Moor at the same time.