Home Sport MVG leads trio of champions into second round 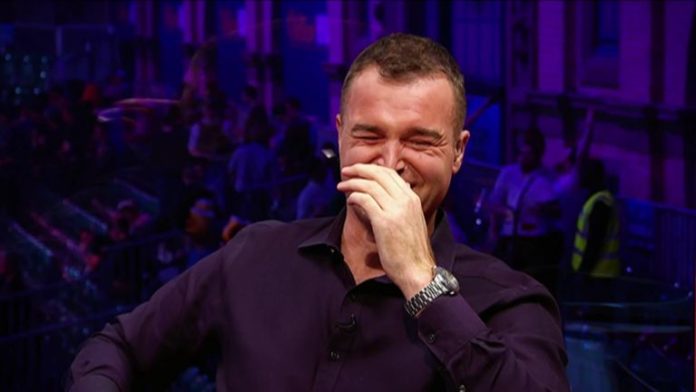 Coverage of the first round continues on Sky Sports Action from 6pm on Sunday with Rob Cross, Peter Wright and Glen Durrant starting their title bid

Some 128 days on from the Premier League in Liverpool, darts on the big stage returned in Milton Keynes, with a trio of title contenders surviving a scare on the opening night of the World Matchplay.

James Wade, Gary Anderson and world No 1 Michael van Gerwen have lifted the prestigious Matchplay trophy in the past and all three will have designs on it again this week.

The trio are in the top half of the draw, so only one will emerge to contend next Sunday’s final as darts second biggest tournament got underway.

Milton Keynes’ Marshall Arena is the sport’s new home as it adjusts to life behind closed doors, but there were walk-ons, crowd noise and even a video wall to allow the players to feel at home.

MVG has suffered a couple of early exits over the last two years and, in Dolan, he came up against a foe who has had the better of him in two of their last four contests. This was no easy win for Van Gerwen who is determined to become only the second men after Phil Taylor to win three Matchplay crowns.

Beaten by Jeffrey de Zwaan and Glen Durrant in the last two years after a run of three finals in successions, Van Gerwen punished early Dolan mistakes to recover from losing the opening leg and open up a 4-1 lead.

However, the Irishman turned the tables, winning four of the next five to level the scores – a showstopping 128 turned the best of 19 scrap into a best of nine.

Van Gerwen did just about enough to stay in front, leading 7-5 he looked set for a burst to the finish line, but back came Dolan again to level at 7-7 before MvG finally got his way. Back-to-back 13-dart legs took him to within sight of the winning post and he sealed a 10-7 success with the next leg and shake of the head.

James Wade, the 2007 champion and a six-time finalist, was forced to dig deep before eventually sealing his date with Gary Anderson in what should be a blockbuster second-round encounter on Tuesday.

Neither man was at their brilliant best, but both will be relieved to come through a strange environment at the Matchplay’s relocated home.

Wade had it toughest, forced to got the distance with Keegan Brown. Having raced into a 4-0 led with a 114 average and a 100 per cent record on his doubles, Wade saw Brown rally to win the next five.

The Needle, who spent lockdown volunteering in an NHS blood laboratory, stopped the rot before the interval and then punished missed Wade chances for a 5-4 led.

A see-saw contest continued to ebb and flow with Brown leading 7-6 before a three-leg run from Wade put him on the brink of victory. Back came Brown again to force the match into overtime where Wade eventually sealed his place in the second round.

He was joined in the last 16 by Anderson, champion at the Winter Gardens in 2018 and after failing to shake off Justin Pipe during the early stages of his back, the Scot produced a brilliant burst to win the final five legs for a 10-5 success over Pipe.

The Force has twice reached the last eight of this format and proved himself a thorn in the side of many a seeded player, and he led early on and then dug deep to level with a spectacular 122 finish on the bullsye.

That was as good as it got as the Flying Scotsman put on the afterburners following the second interval to race away and into his date with fellow former Wade – who has won both previous Matchplay encounters.

Whitlock gets darts back on the big stage

Simon Whitlock proved too strong for debutant Ryan Joyce. The pair had the honour of getting the new look tournament underway behind closed doors – Joyce taking to the stage first as the piped-in crowd noise and walk-on music did its best to fill the void.

Whitlock, twice a semi-finalist in Blackpool, got the better of Joyce thanks to his heavier scoring. The Aussie outscored Joyce 15-7 in scores of 140 or more, and that meant his missed doubles were less costly as he claimed the early initiative and never let go.

A 10-4 win was enough for Whitlock to get over the line, but next he’ll have to overcome a record against MVG that has seen him lose his last 15 and win just one of his last 29.

The Polish Eagle has risen to 13 in the world rankings on the back of a brilliant couple of years but has yet to deliver on the big stage. His performance on Saturday, however, underlined the feeling he will be a dangerous opponent for either Rob Cross or Gabriel Clemens on Tuesday.

It was Wattimena who took the opening leg, but an unfazed Ratajski upped his average to a remarkable 108 and reeled off the next four legs to ram home his advantage, a sensational 132 finish the highlight of his blistering burst.

Wattimena, one of the fastest players in the game, returned from the interval to pick off the next two legs in style. A pair of double 19s saw him close to within two, before taking out 120 to be back within a leg.

But Ratajski went through the gears again, a four-leg burst of brilliance took him to within two of the match, with no sign of his average dipping and maximums continue to rain down on his opponent who himself had been flawless when given a dart at a double.

The pair split the next two, Ratajski’s 118 putting him on the brink of victory which he sealed with a clinical 11-dart leg.

Darts returns to Sky Sports in July, with nine days of coverage from the World Matchplay, every day until the final on Sunday, July 26.