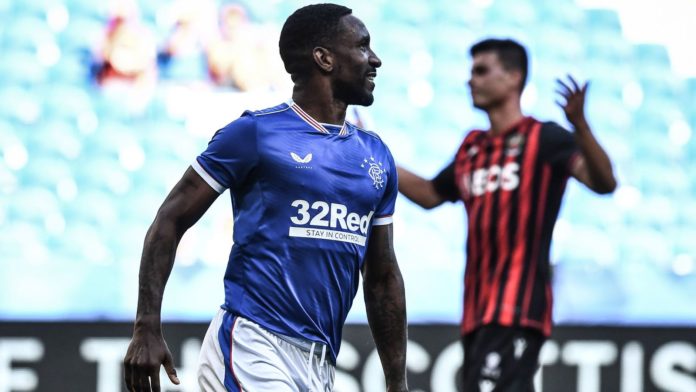 Rangers clinched the Veolia Trophy after Jermain Defoe’s goal sent them on their way to a 2-0 victory over Nice.

Defoe finished off a counter-attack five minutes before the break and substitute Jamie Barjonas netted deep into stoppage time.

Despite the pre-season tournament being billed as a closed-doors event, a small group of Rangers fans celebrated their side’s second win inside the Groupama Stadium as they sealed the silverware before hosts Lyon beat Celtic 2-1 later on Saturday.

Steven Gerrard, who was up against old midfield foe Patrick Vieira in the dugout, brought in Allan McGregor, Glen Kamara and Defoe following the midweek win over Lyon.

Rangers dominated the first half against a youthful Nice starting line-up with Connor Goldson heading over early on and Ianis Hagi twice being denied.

Defoe netted with a left-foot finish from 15 yards after being set up by Ryan Kent after Joe Aribo had won the ball inside his own half and set Rangers away on the break.

Nice created three decent chances around the hour mark, when Gerrard brought on Steven Davis, Calvin Bassey, Scott Arfield and Jamie Murphy. McGregor made one decent stop and George Edmundson made up for a slack pass by diverting a shot just wide.

Rangers could have added to their lead as Kent forced a stop from long range and Murphy had a shot cleared off the line after rounding the goalkeeper.

And Barjonas latched on to a throw-in to expose some slack marking and finish with an angled strike.

Gerrard: Academy players must commit to get first-team chance

Rangers manager Steven Gerrard warned the club’s young players to commit on and off the pitch after praising Jamie Barjonas following his goal in a 2-0 win over Nice.

Gerrard held up 21-year-old Barjonas, Lewis Mayo and Nathan Patterson as examples of what he wants from his academy players after they contributed to the club’s Veolia Trophy success in France.

Gerrard stressed that players with egos would not be involved in his first team, days after reports claimed that 18-year-old Kai Kennedy had been told he was free to find a new club after rejecting an offer to extend his contract beyond next summer.

The Scotland Under-19 international, who has been linked with the likes of Manchester City, Roma and Bayern Munich, made his first-team debut against Stranraer in the Scottish Cup in January but was not included in the squad for the French pre-season trip.

Gerrard told Rangers TV: “I’m pleased for Jamie. This is the first time since I have been in a first-team game that he has really shown personality. We know he has got that, we think he is better than what he has shown. So he will stay around us a bit longer and we’ll try and get him a few more opportunities.

“I have been hearing a few things down at the academy that there’s been a bit of ego about. So they won’t be around me.

“I will only play the players who show me on a daily basis that they’re good enough to be around us and Nathan Patterson, Jamie Barjonas and Lewis Mayo have shown that since the first day. So they deserve the opportunities they have had.”

Gerrard’s men clinched the trophy before Lyon faced Celtic after following up their midweek win over the hosts.

“It’s been a successful trip, not necessarily because we won the competition, that wasn’t the important thing,” Gerrard said.

“So an awful lot of positives to take in terms of the team and the squad.”