Home Sport What next for Dak Prescott? 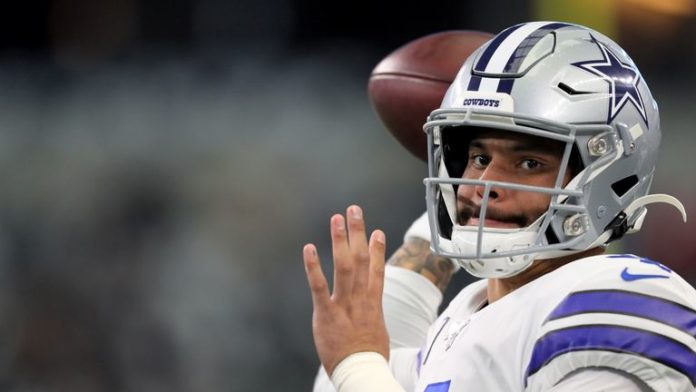 Dak Prescott will enter scarcely explored territory in 2020 as just the third quarterback in NFL history to play on the franchise tag across a season.

The Dallas Cowboys play-caller is owed $31.4m over the next season courtesy of his tag after the two sides failed to reach an agreement over a long-term extension prior to Wednesday’s 4pm ET deadline.

Prescott is said to have favoured a four-year deal as opposed to the Cowboys’ preferred five-year deal in order to put his guaranteed money percentage closer to that of the NFL’s other highest-paid quarterbacks.

NFL Network’s Jane Slater reported shortly after Wednesday’s deadline that the most recent offer had been a five-year contract worth between $33m and $35m per year with $110m in guarantees. This would have supposedly seen Prescott earn $70m over the first two years.

Cousins eventually signed a fully guaranteed three-year deal worth $84m with the Minnesota Vikings in March 2018, setting the quarterback market at the time and demonstrating the kind of shorter-term contract Prescott is now keen on.

Just last week Prescott saw Patrick Mahomes and the Kansas City Chiefs agree the biggest contract in American sports history at 10 years and worth up to $503m when including the remaining two years on his current deal.

“I thought that after the Mahomes deal they would come to the table a little bit,” said Jeff Reinebold on Inside the Huddle. “There were rumours out there. We heard numerous sites say they were going to try and put a deal together before the deadline but there were actually no conversations at all as I understand it.

“That to me is a little bit alarming if you’re in the Dak camp. Dak Prescott gets a lot of criticism that he doesn’t necessarily deserve, I think he’s one of the better quarterbacks in the NFL and as a Cowboys fan you would have some concern if the club didn’t even reach out to him and try and get a deal done before the deadline.

The Cowboys will now be unable to sign Prescott to a multi-year contract until the end of the 2020 season on January 3, 2021. He can be traded to another team until the November 3 deadline, however the chances of that happening look extremely unlikely given not only the Cowboys’ faith in Prescott but also the significant cap hit he would inflict on any potential suitor.

He will become an unrestricted free agent next year should the Cowboys opt against applying the franchise tag to him for a second time. If they do choose to tag him again Prescott will be owed around $37.6m.

“Picking quarterbacks may be the most difficult thing NFL personnel have to do.

“When you have one in your building and he’s a 5,000 yard thrower and he’s a great guy, he’s a leader and all the things Dak Prescott is, to me you don’t let that guy out of the building.

“Look at Dallas’ history when they went that series of time after (Troy) Aikman, it is a scary proposition when you don’t have an elite quarterback.”

While franchise-tagging Prescott for a second season looks the logical route, doing so promises to be a greater hit financially as teams anticipate a change in the salary cap as a result of the coronavirus pandemic’s potential impact on revenue.

Of course there is the risk that Prescott picks up an injury across the next season, which would dent the prospect of him being tagged again.

Form is another factor. Prescott put up career figures in 2019 and helped the Cowboys rank No 1 overall on offense, posing the question as to whether he can match those performance levels in 2020.

With one of the most talented receiver groups in the NFL around him and a top-three running back beside him, Dallas will rightly have every faith that he can lead them to the playoffs.

Playing on the tag in 2020 puts Prescott in a good position to vie for a three or four-year deal as opposed to five years, even more so were he to play on the tag again in 2021.

As Cousins explained to Prescott earlier this offseason, the tag can be his ‘friend’.

It is arguably Dallas that find themselves in the less-favourable position, particular as they face shifting and restructuring some contracts in order to tag Prescott next year. In addition, the longer they wait the higher the price to tie down their franchise quarterback.

Imagine how a bumper new deal for Houston Texans quarterback Deshaun Watson could impact discussions? Or better still a new contract for Lamar Jackson in Baltimore?

Leave it until 2022 and the Cowboys would face a hit of $54.3m were they to use the franchise tag for a third year. By then, it is looking like cut and run time. The alternative and seemingly likely scenario would be free agency, barring the decision to use the transition tag which would result in a 20 percent increase on his 2021 earnings, meaning Prescott would bring in $45.2m.