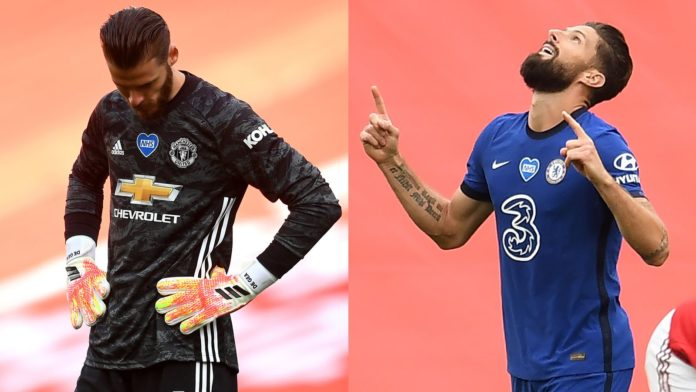 By Gerard Brand and Peter Gill

David de Gea had a day to forget, while Olivier Giroud enjoyed more FA Cup success, but how did others rank as Chelsea beat Man Utd 3-1 in the FA Cup semi-final?

Not one but two errors from the Spaniard gifted Chelsea the victory. For both goals, De Gea went down in installments, not getting his body properly behind the ball, and allowing it to trickle past him and into the net. Made two decent saves thereafter, before being beaten at his near post again for the third. What does the future hold for him? It’s anyone’s guess, but the errors aren’t being eradicated from his game.

Was forced deep by Marcos Alonso for a lot of the first half, and lost the Chelsea left-back for a big headed chance at 0-0. Lost concentration several times and struggled to have an influence in an attacking sense, before losing Alonso again in the build-up to Chelsea’s third.

Was flat-footed as Kurt Zouma headed wide ahead of him in the first half, before being taken off on a stretcher following a nasty clash of heads with team-mate Maguire.

The Swede looks more comfortable on the ball than ever, but this game was more about the defending. Wasn’t the reason for United’s downfall, but didn’t do much to prevent it, either.

Like Lindelof, won’t be blamed for United’s defeat, but allowed Olivier Giroud to make a nuisance of himself in the penalty area as Chelsea exploited wide areas. Headed a good chance to halve the deficit wide from a Fernandes corner.

Was forced back in the first half by Chelsea’s threat down the right flank, and his sloppy pass at the start of the second half allowed Mason Mount in to shoot and force De Gea’s error. Will be disappointed after his first start since March.

Constantly looks to break the lines with his pass, with Fernandes often perfectly positioned to pick up and drive forward. That move didn’t quite happen for United, however, as Chelsea controlled the edge of their box well to nullify United’s threat.

Looked off the pace throughout, completely overrun by a vibrant Chelsea midfield. Chelsea spotted weakness in the Brazilian and feasted on it, not allowing him any space to pass. With competition fierce in that United midfield now, Fred may struggle for minutes.

Won free-kicks in dangerous areas around the box as United looked to ease the pressure in the first half, and looked bright thereafter, but wasn’t able to have his usual influence on the game.

Struggled to make runs into channels with United pinned back in large parts; did bring United up the pitch on a couple of occasions, but in general struggled to make a positive impact. Not the out ball United had craved.

Was chasing shadows in the first half, constantly ran the channels as United looked to ease pressure, but the ball seldom reached him on a rare off-day for the United frontman. Struck just wide from an angle after a fine run down the left flank in the second half, but looked to miss the quality of Pogba, Greenwood and Martial surrounding him from the off.

Instantly made an impact by causing confusion in Chelsea’s defence, and won a late penalty with some positive play in the area.

Booked for a late foul on Kovacic after a heavy touched in midfield, and tried all sorts of audacious passes to claw United back into it, but nothing stuck.

Brave in the tackle but struggled to have an impact. United were chasing the game when he came on, meaning no space in-behind Chelsea as they sat back.

Neither had time make an impact at Wembley.

Flapped at one corner and got away with it. Other than that, he was faultless on an evening when his counterpart’s errors were ultimately decisive.

Rock solid and his pace was crucial in nullifying Rashford and then Martial before outmuscling Maguire to force in Chelsea’s game-securing third.

Excellent. Along with Rudiger, dealt effectively with everything that came his way and quick to break out of his defensive position to help blunt Fernandes.

Surging run and intelligent cross created Chelseas’s opener after he darted forward from his position on the right flank of Chelsea’s three-man defence. Only once was he defensively exposed when Rashford’s superior broke free shortly after Mount had doubled Chelsea’s lead.

Offered width and a physical presence as United’s right flank was effectively neutered from start to finish.

One of Chelsea’s most effective attacking outlets. Drew two saves from De Gea and was twice close to creating golden opportunities with dangerous balls across the box.

Distribution was neat enough but had looked a yard off the pace in the intital stages as he brought down James and Fernandes in close succession. But grew in stature the longer the match continued to finish it as one of the most influential presences.

The scorer of Chelsea’s goal although his relatively muted celebration offered a clue as to the genuine quality of his strike. Bright and breezy throughout.

Terrific. Astonishing workrate as he covered every blade of the Wembley grass and hounded every red shirt in pitch. And to think there was a thought before the game that Chelsea might miss Pulisic.

The Frenchman’s return to glories in the second half of this season has very arguably been one of the campaign’s most heartening subplots. Typically deft flicked was too quick for De Gea and Giroud continued to lead Chelsea’s line with power and poise before being given a late breather.

Only given 10 minutes as a late change for Giroud.

Not the impact he was hoping for: gave away the penalty Fernandes converted late on.

A very late replacement with 86 minutes already on the clock.

Didn’t even have enough time to work up a sweat.