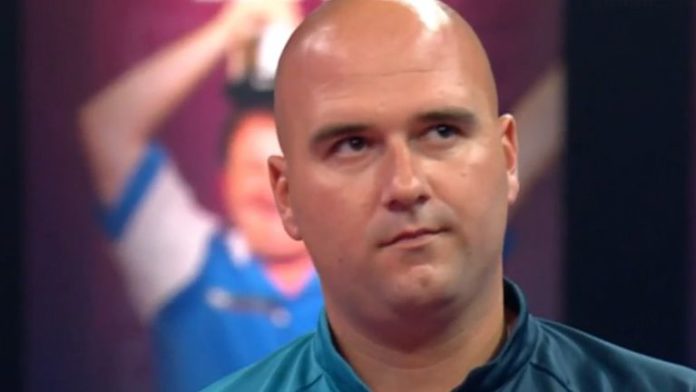 On Saturday’s opening night the seeds all advanced despite being at their best but fourth seed and last year’s champion Cross exited, becoming the first defending champion since Colin Lloyd in 2006 to crash out in the first round.

World No 40 Clemens has been climbing the rankings over the last two years and he proved too strong for a wilting Cross to book his place in the last 16, where he was joined by Snakebite.

Remarkably Wright was facing the very same scenario at 8-5 down in the evening’s penultimate match, but he removed his glasses, and as Jose De Sousa faded, Wright was in position to take out five legs on the bounce for a 10-8 victory.

Cross became the first defending champion to suffer an opening-round exit at the World Matchplay since 2006, after suffering a narrow 10-8 defeat to debutant Clemens.

Clemens capitalised on Cross’ profligacy to lead 3-2, despite a paltry average of 75, but ‘Voltage’ found his spark with checkouts of 76, 94 and 113 to establish a 6-5 cushion.

‘The German Giant’ boasted an impressive 56 per cent conversion rate on the outer ring courtesy of 127 and 170 finishes, and he found his range in the scoring department following an insipid start, firing in four maximums within five legs midway through the match.

Trailing 9-8, Cross was given the chance to force a tie-break but he squandered three clear darts at his trusted double 18 and Clemens made no mistake, sinking double eight to secure the biggest win of his career.

Snakebite and Duzza through to second-round showdown

Wright will face Glen Durrant in the next round after both men endured very different evenings. Durrant breezed into round two with a comprehensive 10-3 success over 2018 semi-finalist Jeffrey de Zwaan.

Duzza’s blistering barrage of scoring overwhelmed the mercurial Dutchman, averaging 106.93 and registering six maximums as he looks to go at least one better than his run to the final on debut in Blackpool last year.

This year in Milton Keynes he will face his great friend Wright, who came through a much tougher assignment against debutant De Sousa, with the Portuguese having enjoyed a spectacular rise over the last couple of years.

A superb 161 was the highlight of an assured debut from De Sousa, who broke early and then consolidated to lead 5-2. It was an advantage he held onto with another three-figure out-shot keeping the world champion at arm’s length.

With the finishing line in sight, De Sousa showed his first sign of nerves and Wright took full advantage. Known for changing his darts during matches, Snakebite took off his new glasses and the turnaround was instant a pivotal 144 finish drew him within one at 8-7.

Then at 8-8, De Sousa looked poised to go within one of the match and a huge shock, but waiting on 38, Snakebite piled in a fifth 180 of the contest to heap the pressure on his opponent.

De Sousa buckled, missing three darts for the lead and he was punished when Wright pinned double 16 to lead for the first time since the opening leg and then sealed a remarkable 10-8 victory.

In his quest for a maiden TV title, last year’s beaten finalist Michael Smith proved too strong for Jonny Clayton – a stunning seven-leg burst accounting for The Ferret and seeing Smith through a date with Mensur Suljovic in round two.

After the pair shared the opening two legs, a new look Bully Boy, who has lost more than two stone during the darts hiatus, went on a blistering run that saw him average more than 100 and fire in finishes of 126 and 103 on his way to an 8-1 lead.

Clayton stopped the rot to claim the tenth leg but it merely delayed the inevitable as Smith won two of the next three to seal a dominant performance and equal Durrant’s biggest win of the first round so far.

As well as defeat in the Matchplay final last year Smith has lost in the final of the World Championship, the Premier League, the Masters and the World Series of finals and with Cross out, his half of the draw has opened up for another deep run.

Suljovic fights back to beat Hughes in epic

Mensur Suljovic has endured a tough last 18 months and defending a runners-up finish from two years ago, he was forced to dig deep before eventually coming out on top in a high-class, yet gruelling contest against Jamie Hughes.

Both men averaged more than 100, shared 18 maximums but it was five 100+ finishes from Suljovic were enough to give him a place in the second round where he will face Michael Smith.

The Austrian was beaten in a pulsating final against Gary Anderson in 2018 and it was more of the same on Sunday night. At 9-7 down he was staring at the brink of a first-round elimination with Hughes’ 118 finish consolidating a break that had given him the lead for the first time in the match.

However, Suljovic responded with a 118 of his own, and then after Hughes had missed a dart for the match, Suljovic pinned his target to level at 9-9 and force the match to go into added time.

A third leg on the bounce took Suljovic back into the lead at 10-9, only for Hughes level for 10-10 before the Austrian’s dramatic conclusion saw him take out 127 on the bullseye and then seal a 12-10 success with a mesmerising 112 and a roar that echoed around the empty arena.

Darts returns to Sky Sports in July, with nine days of coverage from the World Matchplay, every day until the final on Sunday, July 26.