Home Sport Hamilton: F1 must do ‘so much more’ to fight racism 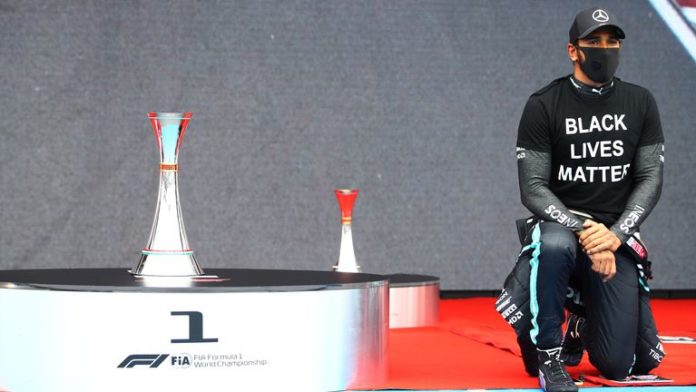 “Today felt rushed and massively lacked organisation and effort, which in turn dilutes the message and makes it seem like there was something more important”

Lewis Hamilton has said Formula 1’s authorities, teams and drivers need to “do so much more” in the fight against racism and inequality, after pre-race scenes at the Hungarian GP the six-time champion labelled “embarrassing”.

For the second successive weekend, the gathering of F1’s drivers in an anti-racism demonstration has been criticised for being disjointed and not presenting a united front in the sport’s messaging.

Not all of the 20 drivers again arrived in time before the Hungarian national anthem while, as has become common place since the season began in Austria a fortnight ago, not all of those present took a knee.

In an interview with Sky Sports F1 after the race, Hamilton said of F1’s organisers: “They need to do a better job. It was such a rush. I was getting out of the car, running over, and quickly taking the knee.”

Hamilton also criticised Romain Grosjean, a director of the Grand Prix Drivers’ Association which all 20 drivers are members of, and said he would be contacting F1 to ask for the drivers to be given more time to show their support.

The Mercedes driver has since elaborated on his thoughts – and issued a robust rebuke of several areas of the sport.

In a post on Instagram on Sunday night, Hamilton said: “Today I raced for everyone out there who is pushing to make positive change and fight inequality, however, sadly, as a sport we need to do so much more.

“It is embarrassing that many teams have not made any public commitment to diversity or that we couldn’t properly find time to make a symbolic gesture in support of ending racism before the race.

“Today felt rushed and massively lacked organisation and effort, which in turn dilutes the message and makes it seem like there was something more important. It doesn’t matter if you stand or kneel, but we should be showing the world that F1 is united in its commitment to equality and inclusivity.”

F1 and the FIA have recently both recently reaffirmed their commitment to ending global racism, while also improving diversity and equality within the sport. F1 launched We Race As One and a new task force ahead of the season, with further detail behind the long-term programme set to be announced soon.

Hamilton’s post added: “F1 and the FIA need to do more. There is no quick fix for racial inequality, but it is certainly something that we can’t just acknowledge once and then move on. We have to stay focussed, keep highlighting the problem and hold those with the power accountable.”

Speaking after the race, the Mercedes driver suggested the sport’s leaders needed to give clear direction for others to follow on how to show a more united front.

“It’s lacking leadership and ultimately we perform in a sport, there needs to be leadership from the top,” said Hamilton. “They need to come out with ‘hey, this is what we are going to do guys and we want you all to be a part of it’ and currently there is none of that.”

Hamilton said that he would speak to FIA president Jean Todt on the matter in the forthcoming days.

“I will get in touch with Formula 1 this week. I will speak to Jean because no one else is doing go do it, particularly,” added the Mercedes driver. “But there are a few drivers who have got in touch with me and are like ‘hey, I want to be a part of this – what can I do?’ which is fantastic.

“My dream is that by the end of the year we know and understand things better, we all stand united, and the whole of Formula 1 is on top of it.”

The Mercedes driver, who said at the previous race that he had to encourage some drivers about the importance of continuing to take a knee, added: “There definitely is not enough support for it. From a drivers’ point of view, many people seem to be of the opinion that they’ve done it once and are not going to do it again. I don’t know their reasons for that opinion.

“We are all members of the GPDA and the GPDA is run by three people. Two who are really for it and support of it and one that is one of those that tends to not think it’s important to continue with.

“Then Formula 1, they did an OK job I would say at the first race. It’s not good enough in terms of what you see in other sports, but still it was a step forwards. Then it’s almost like it’s gone off the agenda after that.”

Hamilton added: “We haven’t made any progress. We have said things and there’s been statements released and we’ve made gestures, such as kneeling, but we’ve not changed anything except for perhaps some of our awareness.

“I am definitely encouraged by our team, those within Formula 1 who are [asking] ‘what else can we do more, can we do better?’ and I think it’s about communication. “