Home Sport Rahm goes to No 1 after Memorial win 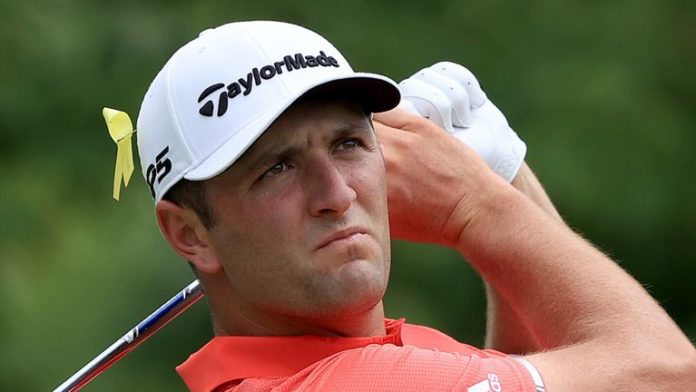 Jon Rahm will move to world No 1 for the first time after surviving a back-nine wobble to claim a three-stroke victory after a dramatic final day at the Memorial Tournament.

The Spaniard saw an eight-shot advantage cut to three in the space of five holes during a thrilling Sunday at Muirfield Village, with the 25-year-old also receiving a two-shot penalty post-round for his ball moving before an incredible chip-in at the par-three 16th.

Rahm eventually signed for a three-over 75 to end the week on nine under and three clear of playing partner Ryan Palmer, with a fourth PGA Tour title enough to leapfrog Rory McIlroy at the top of the world rankings and see him become the first Spanish No 1 since Seve Ballesteros.

Starting the day with a four-shot lead, Rahm opened with four-straight pars before play was halted for nearly 50 minutes due to the threat of lightning on another hot and humid day in Ohio.

Rahm rolled in an eight-footer at the fifth and added a two-putt birdie at the seventh, which extended his lead to eight strokes at the turn after Palmer bogeyed the sixth and eighth.

A wayward drive at the tenth resulted in a first bogey of the day for Rahm, who then found water off the next tee on his way to a double-bogey seven, as Palmer converted a 12-foot birdie at the 12th to cut the lead to four.

Palmer moved a stroke closer with a par at the 14th, as Rahm splashed out of the sand to six feet and missed his par-save, before the pair both failed to take advantage at the par-five next.

Rahm produced the shot of the day after going long of the green at the par-three 16th as he holed his pitch from the rough, only for the birdie to be turned into a bogey post-round after the PGA Tour issued a two-shot penalty for his ball moving before the shot.

The lead increased further when Palmer three-putted the 17th, including one from three feet for par, before Rahm closed out his win with a close-range putt on the final green.

Matt Fitzpatrick posted a round-of-the-day 68 to end the week on five under and in third ahead of Matt Wallace and former world No 1 Jason Day, with just nine players ending the week under par.

Tony Finau, who held a three-shot lead mid-way throughout the third round, slipped to eighth after a final-round 78, while Patrick Reed moved inside the top-10 despite dropping four shots over his final four holes.

Rory McIlroy carded a six-under 78 to finish in the group tied-32nd that also includes Danny Willett, who double-bogeyed the last for a ten-over 82, with Tiger Woods a further shot back on six over and tied-40th.