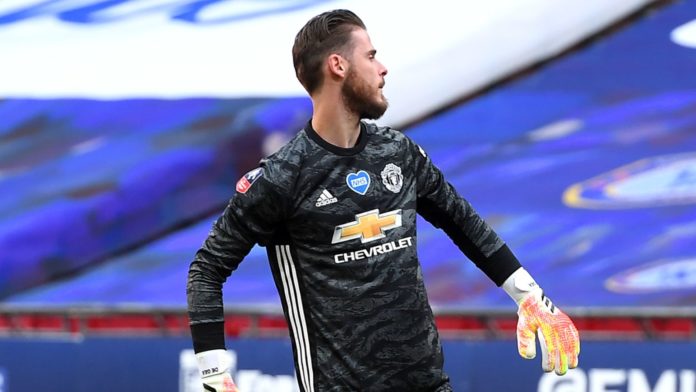 It is only a month since a furious Roy Keane said he was “sick to death” of David de Gea live on Sky Sports after he allowed Steven Bergwijn’s shot to squirm into the net at the Tottenham Hotspur Stadium. One wonders what he must have made of the goalkeeper’s latest showing.

De Gea is in the spotlight again. On Sunday evening at Wembley, he was at fault, to at least some degree, for each of the three Chelsea goals that secured their place in the FA Cup final at Manchester United’s expense.

The second was the worst of the three, a tame, long-range shot from Mason Mount which somehow escaped his grasp. But De Gea will not enjoy watching the others back either. For the first, he was deceived by Olivier Giroud’s flick, the ball spinning over the line after he failed to get enough behind it. For the third, he was punished for leaving a gap at his near post.

That third goal, which took a touch off Harry Maguire on its way in, capped another error-strewn performance from De Gea. And while there were some sharp saves from him at other moments, it is difficult to escape the feeling that the 29-year-old’s poor form now looks more like a decline.

These errors were not even his first since the one at Spurs that so angered Keane. In between, during United’s win over Bournemouth at Old Trafford, he allowed Junior Stanislas to give the Cherries the lead from a shot which came from only a few yards inside the byline.

De Gea had horrible moments before the season’s suspension too, of course. There was the attempted clearance that ricocheted into the net off Dominic Calvert-Lewin against Everton. Before that, there was the Ismaila Sarr shot that bounced through his hands against Watford.

The consensus is that he has not been himself for two years – dating back to his poor performances for Spain at the 2018 World Cup – and the statistics certainly back that up. Since the start of last season, there have been seven errors leading directly to goals in the Premier League alone. Only Newcastle’s Martin Dubravka has made more.

“He was the one player United could rely upon for the last four years but he’s not the same and he hasn’t been the same for some time,” said Sky Sports pundit Gary Neville last month.

Ole Gunnar Solskjaer has opted to shrug off criticism of De Gea’s performances in the past. He said he still regards him as “the best goalkeeper in the world” in the wake of his error at the Tottenham Hotspur Stadium. But even he could not hide his disappointment on Sunday night. “Everyone has to perform,” he said. “David knows he should have saved the second goal.”

Worryingly for De Gea, his decline is gathering pace at a time when Manchester United have a genuine alternative at their disposal. Dean Henderson has conceded just 29 goals 34 Premier League games on loan at Sheffield United this season, keeping 13 clean sheets and only making one error leading to an opposition goal compared to De Gea’s four.

The 23-year-old is due to return to Old Trafford next season, and it certainly seems as though the fans are ready to give him a chance at De Gea’s expense. In a Sky Sports poll conducted on Sunday, 65 per cent of participants chose Henderson as their preferred No 1 for next season.

It’s Solskjaer’s opinion that matters most, of course. But the evidence is becoming impossible for him to ignore. Neville implored De Gea to get “back to basics” when he addressed his poor performances last month. On the evidence of Sunday evening at Wembley, however, a return to his best is further away than ever.

It was not just De Gea’s mistakes that allowed Chelsea to take their place in the final, of course. The Blues were deserved winners at Wembley and Frank Lampard deserves credit for getting his gameplan right.

United were in better form than Chelsea coming into the game. But Lampard sent his side out to attack and be aggressive and that’s exactly what they did. Their pressing was well coordinated and United were stifled as a result, struggling to play out from the back or even get out of their own half for much of the first period.

Lampard’s switch to three at the back made Chelsea more solid defensively, but it also allowed wing-backs Marcos Alonso and Reece James to push forward and stretch United, providing plenty of threat from the wide positions but also creating space in the middle of the pitch for Jorginho and Mateo Kovacic.

Bruno Fernandes did have his moments in central areas, his penetrative passing causing Chelsea problems at times, but by the end he was as frustrated as anyone else in a red shirt.

For Chelsea, the performance is all the more impressive when you consider that it is only a week since their capitulation at Bramall Lane, where it seemed their Champions League hopes might be in jeopardy.

Lampard has coaxed a response from them since then. On this evidence, they might just finish the season with a trophy as well as a top-four finish.