Home Sport Is the hype around Havertz justified? 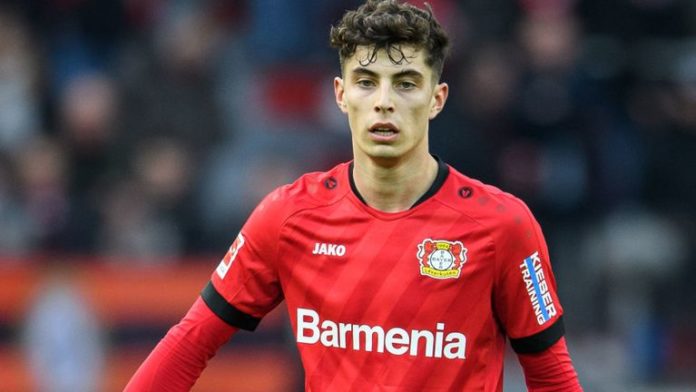 He recently became the first Bundesliga player to reach 35 goals before turning 21, being involved with goals in eight of his last 12 appearances – scoring eight times with four assists.

It is this kind of influence and impact that has seen a flurry of clubs vying for the Germany international’s signature. Sky Sports News reported recently Chelsea are the favourites to sign Havertz this summer, but are not willing to pay the £90m asking price.

However, Bayer Leverkusen are willing to negotiate as the 20-year-old only has two years left on his contract with both parties hopeful a deal can be reached.

A number of media outlets have also linked Bayern Munich, Real Madrid, Barcelona, Manchester United and Liverpool to the youngster, but with so much noise being made about him, is the hype around Havertz justified?…

Born in Aachen, Germany in June 1999, Havertz joined the Leverkusen academy aged 11 and made his first-team debut in October 2016, becoming the club’s youngest Bundesliga debutante at 17 years and 126 days old.

He quickly established himself as a regular in the first team and continued to break records. He became Leverkusen’s youngest goalscorer in the Bundesliga on April 2, 2017 when he scored in a 3-3 draw against Wolfsburg.

In the 2018/19 season, he scored 17 goals – the most by a teenager in a single league season – and lost out on the German Football of the Year award to Marco Reus by the smallest of margins.

He’s continued that form this term, despite the interruptions. He scored in the opening game of the season – a 3-2 win against Paderborn – which was his 25th Bundesliga goal, become the second-youngest player of all-time of reach the landmark behind Horst Koppel.

Fast forward to December and he featured in his 100th Bundesliga game, breaking another Werner record as the youngest player to do so at the age of 20 years, six months and four days old.

The suspension of the Bundesliga did not affect Havertz one bit. He scored twice and assisted three goals in the four games prior to the league closure, and picked up with doubles in the first two games back against Werder Bremen and Borussia Monchengladbach.

He scored another in a 1-0 win against Freiburg – reaching that 35 goal milestone – but was injured 12 minutes later and missed a 4-2 defeat to Bayern Munich.

Havertz has been likened to fellow Germans Mesut Ozil, Michael Ballack and Toni Kroos and is known in Germany as an ‘alleskonner’ – someone who can do everything.

“He has that air of arrogance in a nice way about him and he’s just a natural, he’s two-footed, he’s tall and he’s good in the air. He’s very versatile, he can play across the front, he can play in any position. I think he is the best player we have got in Germany at the moment.”

In the Bundesliga this season he has created 15 big chances, which is the sixth highest in league. By the same token, he has created 59 chances overall in 30 appearances.

Havertz has previously been used as a central midfielder – an area that will have improved his defensive capabilities – but this season, has been used in mostly forward positions, with Leverkusen manager Peter Bosz recently deploying him more as a centre forward.

In his new role, comparisons have been made to Robert Lewandowski and since the turn of the year, the Bayern striker netted 15 times with Havertz scoring 10 goals. Not a terrible comparative tally when looking at the two players – one among the best strikers in the world and the other a young, up-and-coming talent with plenty still to learn.

Wherever he may be played, Havertz has undoubtedly proven he can influence the attacking play and score goals from across the forward line, which will only increase his value.

Who has been linked with Havertz?

Like the Champions League draw, put your hand into a bowl filled with the world’s best teams, pick one out and they have probably been linked with Havertz.

Havertz is currently contracted to Leverkusen until 2022 and despite the impact the coronavirus pandemic will have on transfer fees, the Bundesliga still value their player at £90m but according to Sky Sports News, are willing to negotiate.

Chelsea look increasingly likely to sign the 20-year-old talent with Frank Lampard having the full weight of Roman Abramovich’s chequebook behind him as he looks to overhaul his Chelsea squad with some of the best young talent in Europe.

It is expected the likes of Willian, Pedro and Olivier Giroud will be moving elsewhere once the transfer window opens, paving the way for some new and exciting attacking players. Chelsea have already signed Hakim Ziyech from Ajax and in-demand forward Werner, who had many of his own records broken by fellow Germany international.

Should Havertz join, the newly-singed trio would add an incredible depth to Lampard’s attacking options. Havertz alone has great versatility – he can play in most positions across the forward line – and it would give Chelsea different attacking options when needed without having to use a substitution. However, current forward-thinking players could find their playing time limited, such as Callum Hudson-Odoi.

Sky Germany also reported in April Havertz favoured a move to Bayern Munich, a path many of his compatriots have taken before him. La Liga heavyweights Real Madrid and Barcelona have also been interested, but none of the three clubs are willing to meet the £90m asking price.

“We don’t know yet what will happen to Kai. We know that all the greats from Germany and Europe are after him and that he has the ability to play anywhere,” he said. “He is a fantastic player and, for many years, Bayern has always been behind the young talents of Germany. But we have to wait, there are many factors that can have an influence. His future is not yet decided at all.”

Once again, Liverpool have been linked with the Bundesliga’s best young talent – there was plenty of speculation around a move for Werner – while Manchester United are also said to be interested in Havertz but are focusing on a deal for Jadon Sancho.

Hamann believes Havertz would suit a Premier League move, telling The Football Show: “A lot of Premier League clubs will be interested in Havertz, he’s a terrific player and there’s not many better around at the moment.

“If you look at Manchester United, it’s very clear they need new personnel going forward, and I think he’d improve pretty much every team. Liverpool are a bit different with the way they set-up and play, but besides that he improves every team.

“Before the break people were talking about three figures, a hundred-odd million, if that’s a price any club is prepared to pay in the summer, I’m not sure, but the likelihood is he will leave Leverkusen and take on another challenge in the summer.”

So is the hype real? Absolutely, and the challenge now for Havertz is to prove he can step up to another level and replicate his sensational talent elsewhere.