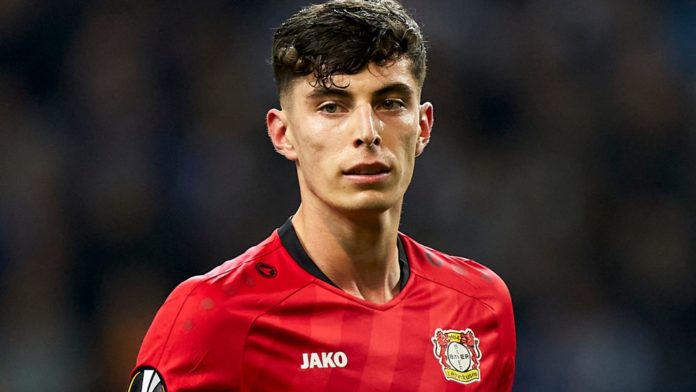 Sky Germany reporting all other clubs out of race to sign Havertz; Watch Liverpool vs Chelsea, live on Sky Sports Premier League from 8pm on Wednesday; Kick-off 8.15pm

Chelsea are in talks with Bayer Leverkusen over a £70m deal to sign Kai Havertz.

Sky Germany are reporting that all other suitors for the Germany forward are now out of the race to sign the 21-year-old.

Chelsea technical adviser Petr Cech will fly to Germany following the conclusion of the Premier League season on Sunday to hold face-to-face talks.

Bayer Leverkusen are understood to value Havertz at £90m but, with only two years remaining on his contract, Chelsea are looking to agree an initial fee around £70m, with performance related add-ons also to be included.

Havertz is understood to be keen on a move to Stamford Bridge, with the player impressed by the side Frank Lampard is building.

Chelsea have already completed the signings of Havertz’s Germany teammate Timo Werner, and Ajax winger Hakim Ziyech, who will join a squad that will be expected to close the gap on Premier League champions Liverpool next season.

Real Madrid, Barcelona and Bayern Munich were also interested in Havertz, but were not in a position to meet the asking price, while Manchester United are prioritising their pursuit of Jadon Sancho.

Chelsea are on the brink of securing Champions League football for next season, with a win in either of their two remaining Premier League games – against Liverpool and Wolves – enough to secure their place in Europe’s top competition.

The London club were unable to sign players last summer as they served a Fifa transfer ban for breaching rules on signing young players, but appear keen to make up for lost time during the upcoming window.