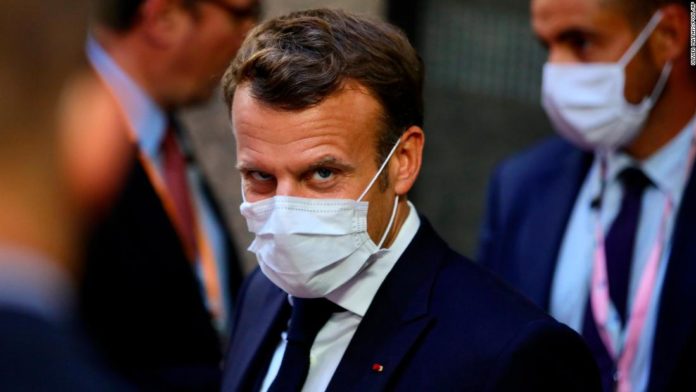 The European Union is battling a savage recession triggered by the coronavirus pandemic, and the hardest-hit countries like Italy and Spain urgently need fresh economic relief worth hundreds of billions of dollars.
But agreement has so far been thwarted by deep divisions over the overall size of the recovery fund, how much assistance should be given as grants rather than loans, and the conditions that should be attached.
French President Emmanuel Macron momentarily lost his temper during overnight talks, French officials told CNN. There was a “tough moment last night,” they said. Talks are due to reconvene Monday for discussions that could decide the fate of the bloc.
Speaking Sunday, Luxembourg Prime Minister Xavier Bettel said he had “rarely seen — in seven years — such diametrically opposed positions on many points” within the European Council of EU leaders.
At the center of discussions was a proposal for the European Commission to raise €750 billion ($859 billion) on financial markets on behalf of all EU states. Under that plan, €500 billion ($573 billion) would be distributed to countries via grants, while the remainder would be offered as loans.
Austria, the Netherlands, Denmark and Sweden had vehemently opposed offering €500 billion in grants over concerns about loading their countries with debt to fund the spending of other EU states.
If the leaders can’t agree, there’s a risk of a two-speed economic recovery, with wealthier northern European states bouncing back faster than struggling Italy and Spain. That could inflame political tensions within the bloc that some experts warn could pose an existential threat to the European Union.
Council President Charles Michel set out what was at stake at the start of the summit on Friday. Securing a deal was, “not only about money, it’s about people, about the European future, about our unity,” he said.
The European Commission said earlier this month that it expects the EU economy to shrink 8.3% in 2020, considerably worse than the 7.4% slump predicted two months ago.
European Central Bank President Christine Lagarde said last week that “an ambitious and coordinated fiscal stance remains critical,” and the ECB assumes a major agreement will pass. This, she said, must happen “quickly.”
Before the EU summit was adjourned after all-night talks, a compromise was proposed that would reduce the proportion of grants to about 50% of the fund, or €375 billion ($429 billion).
Speaking to reporters early on Monday, Dutch Prime Minister Mark Rutte said that Michel was working on a new compromise proposal. “We are not there yet, things could still fall apart. But it looks a bit more hopeful than at times last night when I thought this is over,” Rutte said.
German Chancellor Angela Merkel said on Monday that EU leaders had come up with a “framework” for a possible agreement.
“That is progress — and it gives us hope that there may be an agreement today or at least that an agreement is possible,” Merkel told reporters.
That sentiment boosted markets early Monday with the euro climbing to its highest level against the dollar since early 2019, rising 0.3% to $1.15. It’s since pulled back to $1.14.
The meeting of the EU top brass is the first major in-person gathering of world leaders since the pandemic started.
— Julia Horowitz, Chris Liakos, Rosanne Roobeek, Pierre Bairin, Fred Pleitgen and Nadine Schmidt contributed reporting.