Imagine a lightning bolt igniting in a giant thunderstorm over San Diego and then shooting north almost all the way to San Francisco.

If that seems impossible, consider that just such a prodigious lightning flash has now been confirmed — not in SoCal but in South America. It happened on Halloween of 2018, when a system of massive thunderstorms boiled up over southern Brazil and spawned a single bolt stretching across 440 miles, from the Atlantic coast all the way into Argentina. 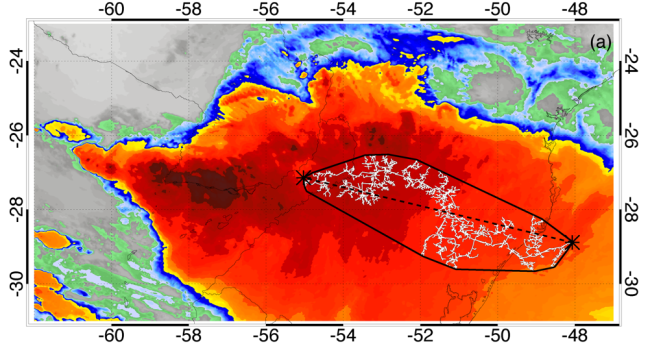 Late last month, the World Meteorological Organization certified it as the longest single lightning flash on record. This far surpasses the previous record of 199.5 miles, set by a flash on June 20, 2007 over Oklahoma.

WMO’s Committee on Weather and Climate Extremes also announced a new record for longest duration flash: 16.73 seconds from a flash that developed over northern Argentina on March 4, 2019. This once again blew the previous record — 7. 74 seconds over France in 2012 — right out of the, well, cloud… 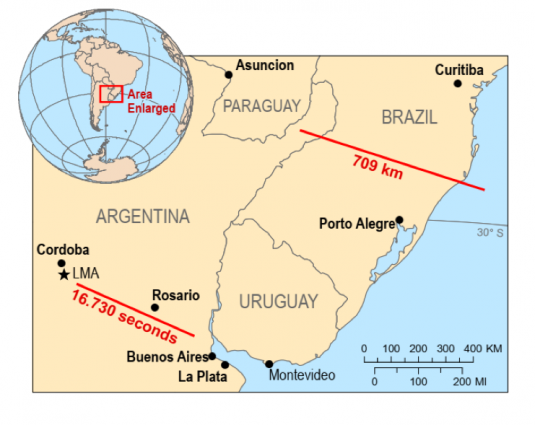 The two record-setting lightning flashes, one over Brazil that’s the longest ever documented, and another over Argentina that persisted longer than any observed before. (Credit: WMO)

“These are extraordinary records from single lightning flash events,” says the WMO’s Randall Cerveny, quoted in a WMO release about the episodes. “It is likely that even greater extremes still exist, and that we will be able to observe them as lightning detection technology improves.”

These record-setting bolts were not spawned by every day thunderstorms, the kind of compact storms that flash frequently and thereby deplete the electrical charges that give rise to lightning. In each case, they were the product of a gigantic collection of thunderstorms acting as a single system — a phenomenon meteorologists call a “Mesoscale Convective System,” or MCS.

The massive overhanging anvils and raining regions of these monsters have large electrified clouds with low flash rates, which allows charges to build up significantly. When a flash does ignite, it can propagate across a vast distance and for a long duration.

The new record-setters came under the discerning eye of what was then a newish weather satellite, GOES-16. The first of a new generation, GOES-16 carries an instrument that continuously maps all lightning activity across North and South America.

The Geostationary Lightning Mapper, or GLM, aboard the satellite detects light emitted by lightning at the tops of clouds, during both night and day. Data from the instrument help with forecasting of severe storms and potentially damaging phenomena such as hailstorms, microburst winds, tornadoes, and hurricanes.

The lightning mapper aboard GOES-16 offers an unmatched opportunity to monitor two hotspots for the development of Mesoscale Convective Systems: the Great Plains in North America, and the La Plata basin in South America. “This makes the GOES-16 GLM an excellent platform for documenting extreme lightning,” scientists concluded in a recent paper on the record-setting flashes. GLM far exceeds the capabilities of its predecessors, they say.

‘The animals are on fire,’ say devastated farmers as wildfires sweep Turkey

Quarantine scrapped for fully vaccinated travellers arriving from US and EU