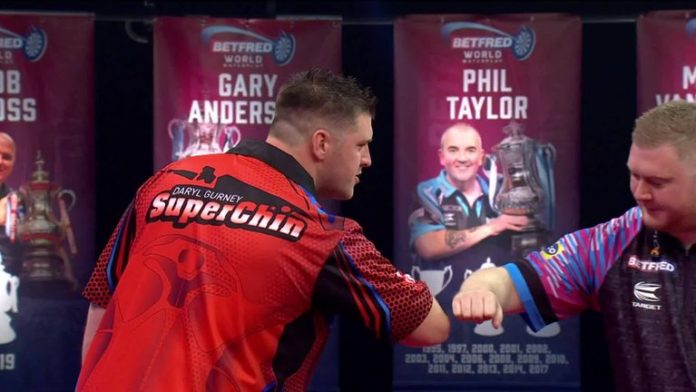 Gerwyn Price has enjoyed a terrific rise through the darting ranks, but one tournament continues to prove his nemesis after a shock first-round defeat to Danny Noppert at the World Matchplay.

After just one seed exited the tournament on the opening two nights, three of the world’s top 16 crashed out on a manic Monday in Milton Keynes, with world No 3 and double Grand Slam of Darts champion Price the biggest name to fall.

The Iceman was well below par in a 10-7 defeat to Dutchman Noppert who joined Vincent van der Voort and Joe Cullen in accounting for their more illustrious opponents at the Marshall Arena.

Below-par Price dumped out by Noppert

Noppert opened up an early 3-1 lead before some trademark Price emotion. All eyes were on the Iceman, one of the most animated players in the game, and the Welshman didn’t disappoint as he sunk a crucial 114 check-out and bellowed out a roar that echoed around the arena to close within one.

After Noppert took his fourth leg, there was an even louder roar from Price, another three-figure finish, this time via the bullseye which kept him within touching distance.

When Price levelled the contest at 4-4, he looked to be going through the gears, however his scoring faltered and a rock steady Noppert ploughed on to take the next three legs.

Price stopped the rot with a crucial break to make it 7-5, but Noppert hit straight back to pin the bullseye before moving 9-5 in front. Price hinted at a comeback with a couple of legs on the bounce but it was to no avail as Noppert sealed a memorable win and a date with Adrian Lewis.

In contrast to Price, Jackpot has enjoyed some memorable performance at the Matchplay and in the end he had too much for Steve Beaton, ending the Bronzed Adonis’ 20th consecutive appearance at the tournament with a victory in extra time.

Lewis averaged in excess of 100 for much of the match, but Beaton rallied from 8-6 down to level with a brilliant 11 finish. The pair couldn’t be separated until a 104 from Lewis seemed to break the Beaton resistance and Jackpot got over the line.

Daryl Gurney’s bid for a maiden World Matchplay crown got off to a solid start with a 10-5 victory over Rapid Ricky Evans that booked a date with Vincent van der Voort in the last 16.

Superchin has reached the last four in two of the last three years and after an even contest over the first 10 legs against Evans he powered away to the finish line with a five-leg burst that underlined his quality.

Evans started fast and threw faster, and he opened up a 3-2 lead as the match went with throw. Gurney took the next mini-session by the same scoreline before landing the first decisive blow in the 11th.

Superchin punished Evans’ missed dart at double top to lead for the first time in the match at 6-5 and he never looked back, winning four more legs at a canter to ease into the second round.

Rock Star gets revenge in thriller

One year on from a match that saw Ian White and Joe Cullen play the minimum number of legs, the pair went the full 25 legs as Cullen claimed a 13-12 win in a topsy-turvy thriller that ended the hope of the 11th seed.

Last year, a rampant White beat the Rock Star 10-0 and Cullen achieved his first aim of avoiding the whitewash by reeling off the first three legs of the match.

White stormed back, pushing his average towards three figures and taking out a brilliant 118 finish on his way to levelling the contest at 3-3. A decisive four-leg burst from White looked like being decisive, with two more huge finishes helping him to a 8-4 lead and on the brink of a place in the final, before the see-saw nature continued.

Cullen closed to within two and then punished White’s errors with a nerveless 98 that reduced the deficit to one before levelling up after a huge mistake from White, who hit 13 when taking aim at double four.

Remarkably Cullen claimed a fifth leg on the bounce to lead 9-8 but standing on the brink of a brilliant comeback victory, Cullen watched on as a skinsaving 89 on the bullseye kept White alive and took the match into overtime.

Both men held onto their throw as the match went the distance where Cullen, having missed five match darts throughout, finally pinned the decisive double.

Dave Chisnall became the second seed to crash out of the World Matchplay, following defending champion Rob Cross with an early exit after a 10-6 defeat to a rejuvenated Vincent van der Voort.

The Dutchman is creeping back towards his best after a couple of years being troubled by a back injury, and he flew out of the traps in a quickfire contest between two of the fastest flingers in the the game to take a 3-0 lead.

Chizzy, chasing a first major televised title, began to chip away at the deficit and when he took out a brilliant 130 via the bullseye the tide looked to have turned.

With nothing in it the pair split the next six legs before Van ver Voort struck for a crucial break of through and a 7-6 lead. And he never looked back, reeling off the next three to make it five legs in succession and crucially a place in the last 16.

Darts is back on Sky Sports in July and August, with nine days of coverage from the World Matchplay followed by the six day Premier League resumption which gets underway on Tuesday August 25