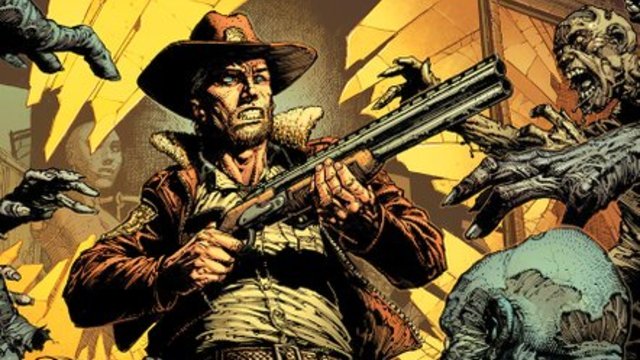 The Walking Dead Comics to Re-Release in Deluxe Color Edition

Some vibrant news out of this weekend’s Skybound Xpo. The Walking Dead comics will no longer remain black and white. Now that Robert Kirkman and Tony Moore’s comic has hit the end of its run, The Walking Dead Deluxe looks set to rerelease the entire story. But this time, it’ll be colored by Dave McCaig (via SuperHeroHype).

Here’s a sample, shared by Skybound on social media.

The Walking Dead characters have appeared in color before. On the covers of the issues, obviously, but also in McFarlane Toys’ comic-based action figure line. We’ll have to see whether or not those color schemes remain canon.

As of publication time, the news appears to have crashed Skybound.com. While the original comics became massively popular, careful colorizing could open it up to a whole new audience.

Running for 193 issues, the original Walking Dead comics followed the adventures of sheriff’s deputy Rick Grimes, who awakens from a coma into a world post-zombie apocalypse. Originally pitched as a follow up to George Romero’s Night of the Living Dead, it was revised so creators Kirkman and Moore could own the property outright. The ensuing wave of merchandise, TV shows, spin-offs, theme attractions, and future movies prove they made the right call.

Will you pick up the new deluxe books in color? Let us know in comments!

The Activision Blizzard lawsuit could be a watershed moment for the business world. Here’s why

The Activision Blizzard lawsuit could be a watershed moment for the...