Home Sport Smith: Grealish is due a goal 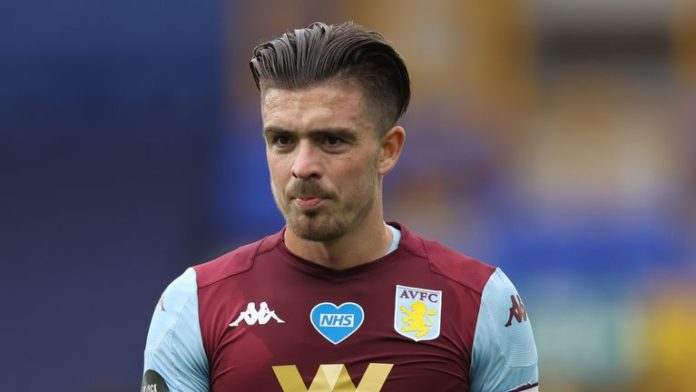 Dean Smith says Jack Grealish is “due a goal” and has backed his Aston Villa captain to end his goal drought in the final two games of the season.

Grealish has not scored since the season restarted last month, with his last goal coming in the 1-1 draw against Brighton on January 18.

Villa are 18th in the table, three points behind 17th-placed Watford and both sides play their penultimate games on Tuesday against Arsenal and Manchester City respectively.

Villa’s goal difference is currently four worse than Watford, but Smith would be surprised if Grealish doesn’t find the net to lead his side’s survival mission.

“Jack [Grealish] is certainly not going to through the whole of Project Restart without scoring,” Smith told Sky Sports.

“So he’s due a goal with the chances that he’s had and the opportunities.

“The other players are as well. Trezeguet scores two against Palace but doesn’t have his best game against Everton. [Anwar] El Ghazi, [Mbwana] Samatta and Keinan Davis, they will come up trumps for us, we’re sure of that.”

Smith also praised his defence before their 37th Premier League match of the season against Arsenal at Villa Park.

“It’s good to see people like Douglas Luiz, Ezri Konsa, their upturn in form. Tyrone Mings has been having a good season anyway. Now Ezri has been catching up in terms of stature”, the Villa manager added. “That’s certainly helped us.”

Smith: We believe we will stay up

Smith’s team have been battling relegation for much of the season, but they have given themselves a chance of staying up after beating Crystal Palace 2-0 and then getting a 1-1 draw at Everton.

The Villa manager says it is tough to prepare for two different scenarios of being in the Championship and the Premier League next season.

“We’re in a similar situation to last year where we had to plan for the Championship and also plan for the Premier League. Because of the position we’re in this season we’re doing exactly the same.

“We were hopeful that it was going to be just planning again for the Premier League but I think that’s been the hardest part of it.

“The football takes care of itself, getting players trained, prepared and ready for the games is quite easy to do.

“So we’re working as hard as we can and we believe that we can get the results that can help us maintain our Premier League status.”

‘We can’t go gung-ho against Arsenal’

Watford’s game against Manchester City will be over by the time Villa kick-off against Arsenal – with both games live on Sky Sports – and Smith says they have to think carefully about their tactics.

“We can’t go gung-ho [against Arsenal]. I don’t think any team can go gung-ho in this league because you can get found out very quickly as we found out this season at times.

“You only have to look at playing Arsenal at their place when we were 2-1 up and going for the third goal and they go and get a free-kick and then a penalty.

“We can’t go and make mistakes. We’ve had to make sure that we restricted our opponents because they were getting too many chances and with the qualities in this League you can’t be asked to score three or four goals to win games.”

Smith said he was disappointed to see Watford head coach Nigel Pearson and assistant Craig Shakespeare sacked with two games of the season to go.

“I was very surprised and first and foremost obviously disappointed for Nigel and Craig who is a really good friend of mine as well.

“We played together years and years ago and I used to clean his boots! I’m really disappointed for them both. Will it affect Aston Villa? Only time will tell. They’re in our sights to try and catch.”

U23s coach Hayden Mullins and goalkeeping coach Graham Stack are in charge of Watford until the end of the season.

“Hayden Mullins and Graham Stack have been there. They were there before Nigel and Craig went in,” Smith added.

“The players know them anyway so there won’t be too much that changes I don’t think at Watford – apart from the positive influence that Nigel and Craig have had there.

“We will all look at their performance at Manchester City and we’ll see whether there has been an effect or not. We can only control what we control.

Smith says he is not worried about speculation on the future of his assistant John Terry, who has been linked with the manager’s job at Bristol City.

Smith told Sky Sports: “I spoke to John Terry about the Bristol City link and he said no. He’s fully focused on the job here.

“We’ve got a really good working relationship and a good relationship away from work as well and he’s fully focused on Aston Villa and we really enjoy working together.”

This is the first time the Villa boss is managing in the Premier League, and he expects a nervous end to the season.

“You know during this period there’s going to be twists and turns. We’ve seen it in the Championship at the moment. I was hopeful that Brentford would go and get the win at Stoke … my old club,” added the former Brentford boss.

“Now it’s [race for automatic promotion] open again with West Brom, and Fulham and Brentford. There are twists and turns, there’s always going to be.

“Pressure does funny things to people at times and that’s the sort of period we’re in and I think it’s important you remain consistent now and be authentic in what you do and that’s what we’re trying to do at Villa.”